The Warriors of Light 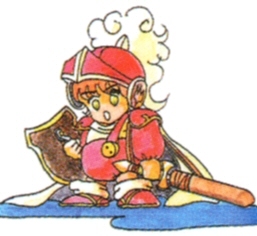 The main protagonists of the original Famicom and Pixel Remaster versions of the game. Four orphans from the village of Ur, they fell into a hole in the Altar Cave while exploring. There, they encounter the wind crystal and are chosen to be the Warriors of Light.

An orphan raised by Nina and Elder Topapa in the village of Ur. Adventurous by nature, his curiosity gets the better of him as he tumbles into a hole created by the great earthquake.

The main protagonist of the DS remake, he's an orphan from Ur raised by the village priest, Topapa. He was the first one to speak to the Wind Crystal, which charges him to find the other three Warriors.

Another orphan raised by Topapa, and Luneth's best friend. Unlike Luneth, he prefers reading over gamboling in the wild. His studies endow him with great knowledge that more than makes up for his shyness.

Luneth's studious best friend, who is also from Ur and raised by Topapa. He tries to prove himself by going to Kazus for proof that there are no ghosts there and is terrified when he finds out the place is cursed, and insists on joining Luneth to become braver. 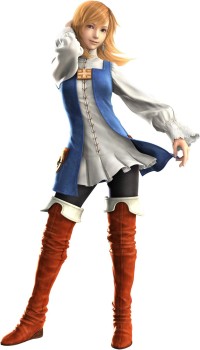 An apprentice blacksmith from Kazus. She escaped the curse by running away and joins Luneth and Arc when they find her in Cid's grounded airship.

A loyal soldier of King Sasune's army, he narrowly escaped the Djinn's curse. His prime concern is finding the missing Princess Sara.

A soldier from Sasune, he's a loyal protector of the throne. He was training outside the castle when the curse struck and joins the other three to find Sara and the Djinn with King Sasune's permission. 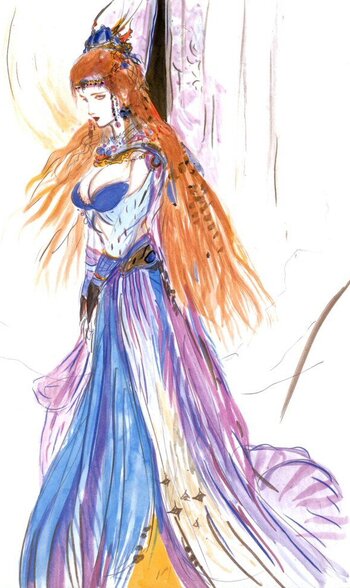 The Princess of Sasune, who holds the Mythril Ring that can dispel the Djinn's curse.
Cid Haze 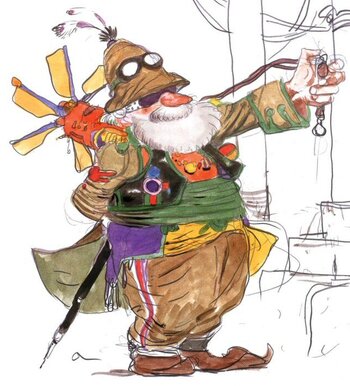 A jolly old man who owns an airship. He plays a larger role in the remake.
Desch 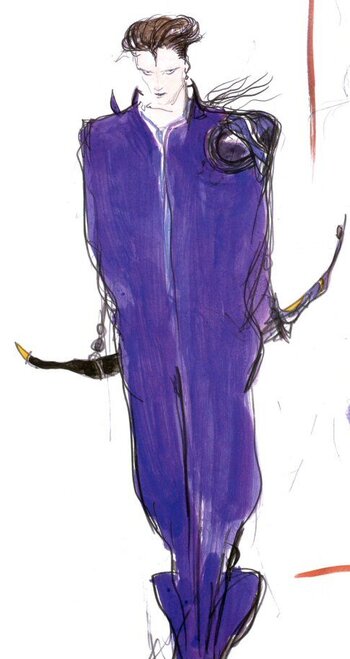 A man suffering from amnesia, he accompanies the heroes to try and find his lost memories.
Advertisement:
Aria Benett
A young girl who lives on the surface world and accompanies the party.
Alus Restor 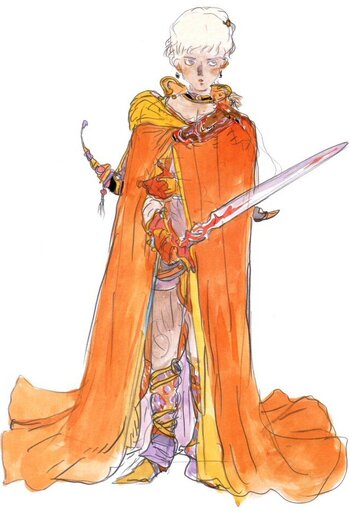 The young prince of Saronia who was exiled by his own father. The party finds him being mocked in a pub.
Doga and Unei 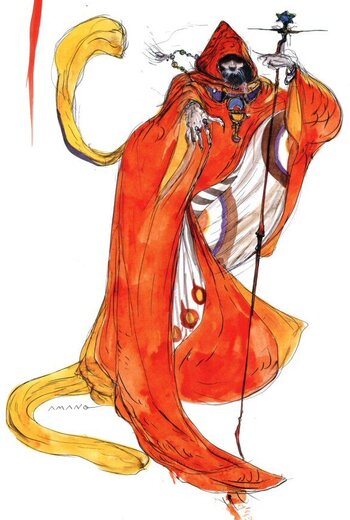 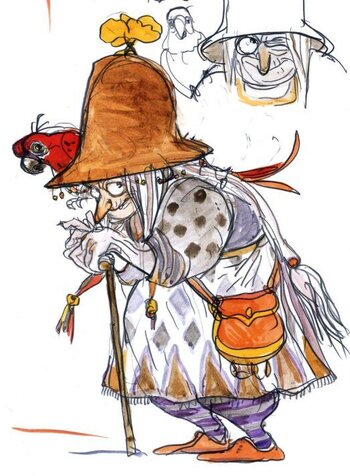 Unei
Two ancient Sages who trained under Noah, Doga was blessed with great magical power while Unei was given control over the world of dreams while she slept.
Warriors of Darkness
The dark counterparts to the Warriors of Light, they are a quartet of Warriors who rallied to defend the World of Darkness from being swallowed by the light many years ago. The Warriors of Light seek their aid in the battle against the Cloud of Darkness.

“Once you are gone, eternal life will be mine!” 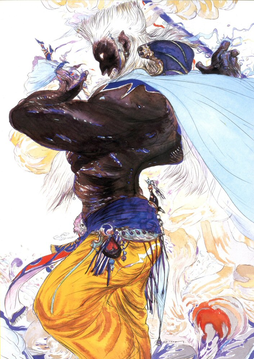 The third student of Noah who trained with Doga and Unei. While Doga and Unei got great powers from Noah, Xande's gift from their master was mortality when previously the four of them were all immortals. Outraged at this snubbing, Xande sought to destroy the Crystals and cause a flood of darkness that would trap the world in temporal stasis, allowing him to avoid dying.

Djinn
An ancient evil spirit who was released by the same earthquake that dropped the Onion Knights/Luneth into the cave containing the Wind Crystal. He turns the people of Kazus and Castle Sasune into ghosts, and defeating him to lift this curse becomes the first major objective of the newly formed Light Warriors.
Gutsco the Rogue
A thief who wants to steal the power of the Fire Crystal. The Light Warriors initially fight him while he's trying to steal the horn of ice needed to safely pass through the volcano where the Fire Crystal is located. Although defeated, he follows them by disguising himself as a shadow, manages to steal the horn anyway, and manages to get to the Fire Crystal just before the Light Warriors do.
Sorcerer Hein 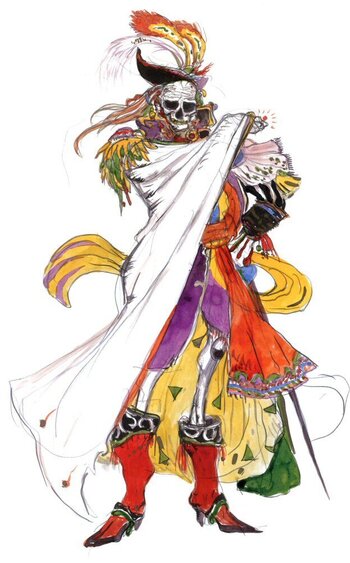 A former advisor to King Argus. Hein eventually staged a coup, kidnapping and brainwashing the members of Castle Argus and transforming the Elder Tree into a floating fortress. He is confronted by the party after they are captured in Tokkul and taken to his castle.
Goldor
A wealthy citizen of Amur who lives in a giant gold manor. Upon learning the Warriors of Light are going around absorbing the power of the elemental crystals, he chains up their airship with a giant gold chain under the mistaken belief that they're planning to take his precious gold crystal.
Gigameth
The chancellor of the kingdom of Saronia, Gigameth has cast a mind control spell on King Gorn and forced him to order his soldiers to fight each other as well as exile his son Prince Alus. When Gigameth tries to force Gorn to kill Alus, Gorn stabs himself instead, breaking Gigameth's hold over him. When confronted by the Warriors of Light, Gigameth reveals his true form as the monsterous Garuda.
Medusa, Kraken, and Titan
Minions of Xande sent to stop anyone from interfering with their master's plans. Medusa is sent to collapse Owen Tower in order to cause the Floating Continent to crash, Kraken is sent to destroy the water crystal and kill the Warriors of Light when they come looking for it, and Titan confronts the Warriors of Light at the earth crystal.
Cloud of Darkness 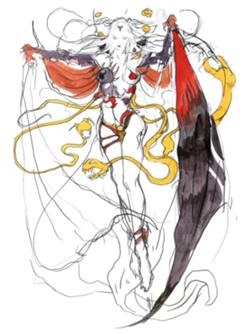 An ancient entity that is the embodiment of nothingness, she appears when the powers of light and dark are unbalanced to return all to the Void.

The way of the onion knights is a long and hard one... but once you master the job, the rewards just might be worth it!

Freelancers can use low-level magic, but their base attributes are pretty low.

Warriors are weapon experts. Their Advance ability allows them to deal even more damage than normal, but they also get hit a lot harder.

Monks are very resilient melee fighters. Their Retaliate ability allows them to counterattack while on the defensive.

Red Mages can use both white and black magic, but cannot use high-level spells from either school.

White Mages are casters who specialize in restorative magic. They're not physically strong, but their willpower is incomparable!

Black Mages are casters who specialize in offensive magic. Despite their appearance, they can take a few hits, too.

Thieves are very fast and agile, and they can swing their weapons lightning-fast. They also have the ability to pick locked doors. Their steal ability allows them to take items from enemies. Also, everyone will take less damage while escaping if they use Flee.

Rangers are experts in ranged combat. With their bows, they can attack for full damage from even the back line! Their Barrage ability allows them to unleash a hail of projectiles at the enemy!

Knights take pride in their defense. Their Defend ability allows them to step in and take damage for weakened allies. And they can use white magic, too!

Scholars can examine enemies and spot their weak points. They can also enhance the effects of items they use. They can dispel magic effects from enemies they've studied. Surprisingly enough, these bookworms can also use magic!

Geomancers harness the power of nature itself, manifested in their different terrain attacks. Their damage potential rises exponentially by job level.

Dragoons are polearm experts. Their Jump ability allows them to deal massive damage while being impervious to enemy attacks.

Vikings have the ability to lure enemies into attacking them instead of other members of the party, but it's gonna hurt!

Dark Knights are warriors of the dark blade. Their Soul Eater ability allows them to convert their life into extra damage.

Evokers are initiates of summoning magic, able to randomly draw either the light or dark power of summoned beasts.

Bards use their songs to enhance their party's performance. The effect of their songs varies depending on the harp they use.

Black belts are experts in unarmed combat. They can boost their attack power to deal massive damage, but be careful not to boost too much!

Ninja excel at using dark blades. They have the ability to throw weapons, which deal enormous amounts of damage.

Devouts are casters who have mastered white magic. They can use all white magic spells, so make sure to always have one in your party!

Magi are casters who have mastered black magic. If they can learn the forbidden black magic spell, they may be able to destroy all...

Summoners are able to draw the hidden powers of summon beasts. Their powers will be further enhanced if they can find the legendary beasts...

Sages are those who have gained knowledge in all schools of arcane arts. They can use all types of spells!