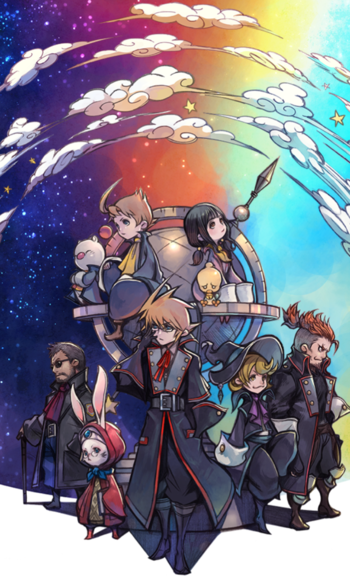 Final Fantasy: Record Keeper is a Freemium game for mobile devices that's based on the mythril-munchingly popular Final Fantasy games. It is the second game of this style in the series, following All the Bravest.

The story centers around a great kingdom whose livelihood thrives off a library of records, and within those records, which take the form of paintings, are the tales of brave heroes of the past (a.k.a. stories of past Final Fantasy games). All is well until one day, the paintings mysteriously begin fading, throwing the entire kingdom into chaos. Dr. Mog, the head librarian of the kingdom, believes something is afoot, and enlists his finest protégé, the Record Keeper Tyro, to restore the paintings and save the kingdom. To do so, he must travel into the realms of the paintings attuned by Dr. Mog and relive the struggles of the past stored within the records.

Record Keeper's dungeons are paintings that represent various Final Fantasy games and related enemies. The bulk of the content are Realm Dungeons, which have players fight in recreations of iconic battles of the games in a rough retelling of the game's events. An expansion of this idea are Record Dungeons, where the player controls a party combined of their protagonists and that game's characters and actually plays through the game's events on a short map they explore and watch cutscenes that recreate the events of the games. The other regular content is weekly Challenge Events, timed events that are themed around a few particular characters and tend to be accompanied by relic banners spotlighting them. Other events may also rotate weekly, including events where the player can play them repeatedly to collect tokens to exchange for items, events where the player can fight a particularly powerful boss from the realm being spotlighted in the current Challenge Dungeon, and events where the player must fight a gauntlet of enemies with entirely different parties, or a single party that must have the endurance to beat multiple bosses. As the metagame has evolved, these rotating weekly events became primarily a means to give newcomers a way to recruit characters, and all players a way to stockpile resources to upgrade their party.

The "endgame" content is permanent and varied. These include Nightmare Dungeons, Puzzle Bosses that require clever strategy to defeat; Magicite Dungeons, a series of bosses based on Elemental Rock–Paper–Scissors that need elementally-focused teams to defeat; and Cardia Dungeons, where each dungeon is themed around a particular realm and the player must bring their best fighters from that realm or suffer stat penalties for off-realm characters. Magicite and Cardia dungeons are tiered in levels of power, with Cardia also being divided into Dream, Torment, and Dreambreaker dungeons, each harder than the last.note Torments were originally called Nightmare Dungeons in Japan and the Nightmare Dungeons were Abyss Dungeons. Since Nightmare Dungeons was in use in English when Nightmare Dungeons began began in Japan, they were renamed Torment Dungeons and the Theme Naming was lost. There's also the Labyrinths, where the player must bring three parties to explore a corridor of paintings variously containing treasure, stat boosts, debuffs, and enemies. The Labyrinth has continued to grow every few months with a rotating list of equipment to be found and new bosses added, which are a mix of element-focused and realm-focused. Aside from Nightmare Dungeons, the objective with all of these dungeons is to beat the enemy as quickly as possible to reap the most rewards for your victory; a win in under 30 seconds is usually the best time the game will ask for.

Gameplay in Record Keeper uses the old-school Active Time Battle System. Players control a party of five characters, each able to equip two abilities with a limited number of charges, and they can also equip Materia, divided into two types (Legend and Record; Legend Materia is character-specific, Record Materia is universal) that grant passive abilities like a chance to dualcast commands or increase the potency of attacks. The player can support their party with Magicite, the game's Summon Magic, or a Historia Crystal, a different type of Summon Magic that focuses power into heroes from a particular realm rather than calling a powerful monster. Characters can be upgraded with Motes, Crystal Water, and Magia to improve their stats and expand their ability pool. The game's Limit Break system is Soul Breaks, which are learned by acquiring a relic that contains that Soul Break. Characters can equip up to ten Soul Breaks and their effects tend to nudge them into specific playstyles. Characters often have a degree of overlap but still usually have something unique they could bring to a party. For example, Cloud, Zack, and Angeal, are all wind-elemental characters, but Cloud excels most at dealing heavy damage with attacks that can break the damage cap, Zack lacks raw power but can lower the enemy's resistance to wind attacks, and Angeal can help keep the party alive with support healing and barriers to reduce the damage the party takes.

Although the game expects players to keep up with the Power Creep, as most gacha games do, the manner in which these dungeons are structured and their mechanics designed means that fully built characters are not necessary, a single good relic can be enough for a character to carry their weight. Considering that many characters now have dozens of relics, the developers thankfully don't expect you to have all of them. Older relics are no longer even offered on some banners and are made available in an in-game shop, where players can trade for them with currency earned entirely in-game. While these Relics and their associated Soul Breaks are outdated, they're not obsolete and can be useful to fill in a character's kit with a key element they were missing. This means that Record Keeper averts Allegedly Free Game very effectively: you won't always get the relics you want to clear the latest content, but with a bit of luck on the gacha and patience to let Power Creep sink in, eventually you can get what you need, likely just in time for the next tier of content to release and keep you pushing on.

In June 2022, it was announced that the global version of the game would be shutting down in September of that year. The Japanese version will still be going on.

Recruitable Characters (Sorted by Synergy)
Note: Characters in italics are, as of March 2022, available only in Japan.

Note that due to frequent updates (the Japanese version is always about six months ahead of Global), game features mentioned anywhere may not yet be available in your version of the game, weren't available when you used to play it, or may even be outdated in your version at this point.

open/close all folders
A
B
explode as he finishes off the attack with a final slash.
C
D-F
G-K
L
M
N-O
P
R
S
T
U-V
W-Y