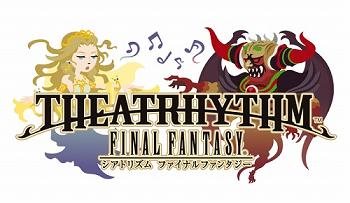 "I played Theatrhythm Final Fantasy for the first time today. Not too shabby! As I remembered various things from the past 20 years, I was reduced to tears. FF music fans should definitely play it. Won't you cry with me?"
— Nobuo Uematsu
Advertisement:

An... out-of-nowhere entry in the reflex-inducingly popular Final Fantasy series, this game's premise is relatively simple: bringing the "conflict of the gods" plot of Dissidia Final Fantasy to the Nintendo 3DS and later a port to iOS, but in the form of a Rhythm Game. In other words, it's Groove Coaster meets Final Fantasy.

Okay, time for a brief lesson in recent-gaming history for everyone: Dissidia Final Fantasy, when first released, caused many fans to wet their pants in excitement just for the fact that a fighting game featuring representative heroes and villains from the Final Fantasy seriesnote (from the first installment right up until the latest released at the time) could only be justified with the words, Rule of Cool, on which the concept was basically built.

Then, the sequel (Dissidia 012 [duodecim] - Final Fantasy) was released, but this time around, sadly, the rejoicing (with Lightning joining the fight, among others) was foiled by the rather disappointing announcement that the game in question would be the last in the series, or at least, the last appearing in Fighting Game form.

Turns out, the next game in the Dissidia series is a Spin-Off for the Nintendo 3DS, a Rhythm Game featuring (as the logo above - a throwback to that of Dissidia itself - shows) the characters' avatar versions first seen in Kingdom Hearts coded.

The game follows the events of the gods Chaos and Cosmos, a similar plot to Dissidia Final Fantasy. The space between the two is called Rhythm, which gives birth to a crystal that controls music. Chaos causes the crystal to become disrupted, and the only way to return it to normal is to increase a music wave known as Rhythmia.

The sequel, in addition to including the DLC and iOS characters, also introduces..

The game also features enemies and bosses from the games ranging from the main villains like Chaos and Sephiroth, mid-bosses like Xande, Black Waltz #3, Gilgamesh, Ultros and the Elemental Archfiends, mainstay monsters like tonberry, bombs and behemoths and even common enemies unique to each game like PSICOM enforcers and bangaa thieves all redesigned to fit the game's unique art style.

The game operates in three different styles of stages. Battle Music Stages have the players chosen party members occupying the right side of the screen like a classic Final Fantasy game. You score hits on the enemy by successfully hitting notes, and by getting higher combos you can unleash stronger attacks like Summon Magic. Event Music Stages feature video montages from Final Fantasy games, and the player has to tap the notes in rhythm while the cursor moves around the screen in various patterns. Field Music Stages are represented by a chosen playable character strolling though the scenery from different Final Fantasy Games. By scoring higher combos you can run faster, encounter Moogles, and even call a Chocobo to give you a ride.

The game's success has earned it the right for a sequel, Threatrhythm Final Fantasy: Curtain Call

for the 3DS, which released in Japan of April 24, 2014, with North America and Europe getting it Sep.16th and 19th of 2014 respectively. and It now has over 200 tracks (including a number of DLC tracks from Bravely Default, the SaGa series, Chrono Trigger, Final Fantasy Adventure, Secret of Mana, Trials of Mana (then known as Seiken Densetsu 3 even outside Japan), Xenogears, The World Ends with You, Live A Live, Nier, NieR: Automata and Octopath Traveler) with 60 playable characters, which seemingly includes characters from the iOS version of the game plus more. It also has a new Versus Mode to compete in rhythm battles against other players that can also be played online and the option to use the buttons the play the game instead of the touchscreen. Finally, it also has a new set of Event Music stages with the ones in the first game remaining exclusive to it, and Airship Stages that show the notes flying into the screen from the horizon.

The series also received its own arcade edition, known as Theatrhythm Final Fantasy: All Star Carnival

for Japanese arcades in 2016. All-Star Carnival translates the series' mechanics into arcade form, with the addition of a few new mechanics such as two-button notes and a Summon Meter that allows you to call a select Summon to your party's aid. The gameplay also expands into default multiplayer, with up to four players tagging along on the same quest simultaneously for 16 characters worth of field-running, mook-stomping, boss-breaking action.

Square-Enix would later make other rhythm games based on other franchises which have similar gameplay: Theatrhythm Dragon Quest and Kingdom Hearts: Melody of Memory.