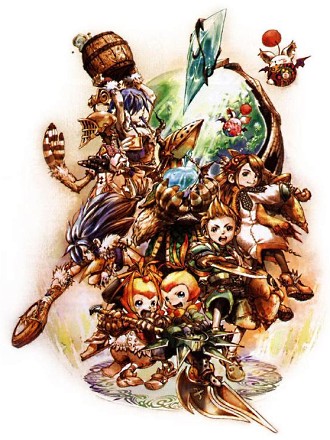 Final Fantasy Crystal Chronicles is another Spin-Off of the groin roastingly popular Final Fantasy franchise, and the first to appear on a Nintendo console since the release of Final Fantasy VI. Previously, the games in the Crystal Chronicles series tended to be action RPGs that focus on multiplayer action and co-operation, though later games have shied away from that requisite. Square Enix defines the series by stating that its entries exhibit new and different ways of experiencing Final Fantasy. It could be argued they all take place in the same universe as well.

The first game, released in 2003 in Japan and 2004 internationally for the Nintendo GameCube, is the tale of a caravan (made up of characters which you create) sent on a annual mission to replenish their village's crystal with myrrh. The replenished crystal could then protect the village from the deadly miasma that covered the world for another year. The adventurers carry the myrrh in their Crystal Chalice, which is mounted with a small crystal to protect them from miasma as they travel.

It gained infamy for the sheer amount of peripheral devices required to play the game with the maximum number of players in anything approaching a sane manner: four Game Boy Advances (which would act as individual screens for each player) and four GameCube-to-GBA connection wires. Oh, and three other people. Innovative? Yes. Practical? Yeah, no. (You could play with only two or three people, but it's obviously tougher than with four... Playing with only one player was also possible thankfully, so there was no need of a Game Boy Advance, and even comes with a Moogle to carry the Crystal Chalice for you.)

It should be noted that this game is similar, in many aspects, to Gauntlet Legends. The four races even correspond to each of Gauntlet's classes: Clavats to the balanced Valkyrie, Lilties emphasize Strength like the Warrior, Yukes are magic-users like the Wizard, and Selkies are speedy like the Elf/Archer.

The second game, released in 2008 for the Nintendo DS (under the lengthy title Final Fantasy Crystal Chronicles: Ring of Fates), stars a set of twins named Yuri and Chelinka, two children of a great seer, out to stop an ancient prophecy under the light of an ominous blood moon.

The third game is My Life as a King, which was one of the first WiiWare titles, and the first Wii game to feature paid downloadable add-ons, and thus the "Pay + Play" mark. In many ways, it plays more like SimCity than an Action RPG. Its sequel, My Life as a Darklord, casts the player as a budding Evil Overlord who guides an army of monsters to defend a tower from invading heroes; it plays like a combination of SimTower and Dungeon Keeper.

Echoes of Time, a sequel to Ring of Fates, was released in early 2009 for the Nintendo DS and the Wii. Both games are functionally identical and can be played with each other via wireless connection. While the DS version was met with praise, the Wii version was rightly tempered for being a blatant port of the portable game, complete with two separate "screens" on the television.

Though it was delayed and extensively reworked, The Crystal Bearers was released in late 2009. It is a single-player action-adventure set far into the future of the previous Crystal Chronicles games, in a time where magic is dead, an industrial age is booming, and the Yuke race has supposedly been eliminated after a great war. The protagonist is Layle, a hero with an embedded crystal that gives him a strange power to manipulate gravity.

After essentially fading into obscurity and being barely referenced in the rest of the Final Fantasy franchise, both Sherlotta and the Undead Princess from Echoes of Time make cameo appearances in World of Final Fantasy, being the first character in World that comes from a spin-off rather than one of the numbered titles. Since then, the sub-series has seen somewhat of a return to the limelight. As of the time writing, seven Crystal Chronicles characters have appeared in Dissidia Final Fantasy: Opera Omnia (Chelinka and Yuri, Shelotta and Layle; later Ciaran, Keiss, and Amidatelion were also added), and a remastered version of the first game (appropriately labeled with the sub-title, Remastered Edition) was released on August 27, 2020 worldwide for Nintendo Switch, PlayStation 4, iOS, and Android.

Tropes common among the series: