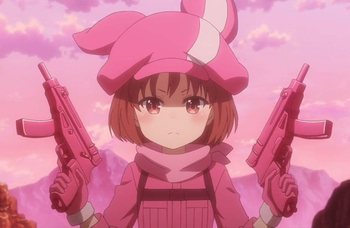 Please, you're trying to tell me this little avatar can possibly- OH MY NARDS!
"He shouldn't be allowed to be that cute and that strong. It's not fair."
— Mei Sakura (on Negi Springfield), Negima! Magister Negi Magi
Advertisement:

Significant overlap with Cute Bruiser and Little Miss Badass can occur. What distinguishes Badass Adorable characters from their peers is the adorability. Particular emphasis is placed on their inherent vulnerability (emotional or otherwise), which is at odds with the abilities they can access.

Underneath the irrepressibly cheerful demeanor, behind the innocent wide-eyed gaze, lies an astonishing capacity for kicking your ass, leveling a city, or why not, leveling an entire country. Perhaps you've threatened their loved ones. Maybe you've offended their inviolate sense of justice. No matter what shape the grievance against you takes, they will give you an entirely new set of benchmarks to define hurt. Their destructiveness is directly proportional to their cuteness. Thus, Beware the Nice Ones.

Compare and Contrast with Crouching Moron, Hidden Badass, who may not even be cognizant of their own badassery. Often exists as a subversion of the typical Tag Along Kid and Team Pet. See also Tyke-Bomb, for when the Badass Adorable is reared for the sole purpose of serving as living weaponry. A badass little critter can also be a Killer Rabbit. When the cute character is not only badass but also malevolent, then Cute Is Evil.