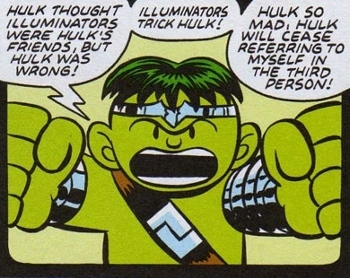 This speak type for character has more muscle than brain.

They substitute "Me" for "I", or else refer to themselves in third person. They put special emphasis on nouns and verbs, and most extra parts of the sentence are lost. If any name is too long, it gets substituted with a cruder name/description (often "(Descriptive adjective)-man or -lady"). They also skip any and all articles ("a," "an," and "the"). Favored words include "Smash", "Puny", and "Blank-thing" (e.g. "HULK SMASH PUNY LIZARD THING!" when fighting a velociraptor). Yes, the all-caps is necessary. The primary differences between Hulk speak and Baby Talk are usually at least six feet and 300 pounds.

The most important characteristic of Hulk Speak is its minimalism. The format is usually, "Me, (the person speaking) (verb) (subject)."

Prepositions, indefinite, and definite articles are almost completely stripped out; although given how redundant these usually are, (particularly the latter) in many cases the effect makes Hulk Speak easier to understand than plain English, at least when only a single subject is being discussed. In this sense, Hulk Speak could be considered a literal English translation of the Klingon language,

which as you might expect, uses a very similar structure.

There is also a version sometimes seen in Japanese works (albeit not quite as often as in those written in English), where a character (usually a Funny Foreigner or Raised by Wolves type) is shown to speak in a somewhat broken fashion. Although still retaining the use of pronouns, they will often miss words used to bridge sentences and come off as simple or uneducated. English translations have a tendency to render this "broken Japanese" as out and out Hulk Speak.

Sometimes this dialect will spoof itself, with the character referring to complicated issues. ("Mongo only pawn in game of life.") Consistent with this, characters who use Hulk Speak often have surprising levels of intelligence and philosophical depth. In a sense, it could even be said that their form of speech is an intellectual advantage, as it allows them to simplify complex ideas.

As with The Ditz, an easy way to derive humor from a character using Hulk Speak is to occasionally give them lines expressing more complicated concepts than their usual diction would imply they were capable of grasping. E.g. Thog's first line here

The trope's name is derived from the speech pattern of Marvel's Hulk.

Contrast with Genius Bruiser and Spock Speak: the former is when a big tough guy is highly intelligent, the latter is when someone speaks with an excessively stiff, formal language. The Genius Bruiser will sometimes use Hulk Speak to hide his intelligence. You No Take Candle is when a foreign character, usually as a result of poor grasp of English, speaks like this. When trying to describe more complicated concepts, will often overlap with Buffy Speak. Compare Pokémon Speak where the only thing a character says is his or her name.