Film / Rise of the Planet of the Apes 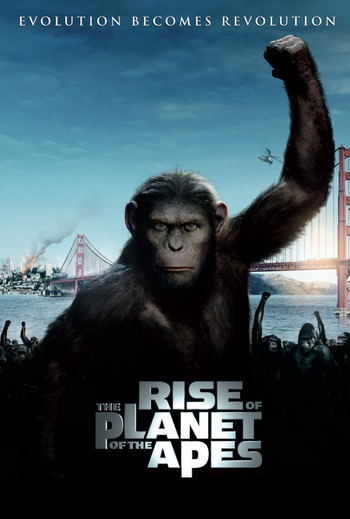 Will Rodman, a scientist attempting to find a cure for Alzheimer's disease (fueled by the desire to cure his father of the illness), finds incredible results with the experimental virus-based drug ALZ-112: "Bright Eyes", a female chimpanzee injected with the drug, becomes more intelligent soon after the drug takes effect. Will believes the time is right to fund human testing — but during his pitch to potential backers, Bright Eyes inexplicably goes berserk and gets gunned down in the middle of the meeting. Fortunate to still have his job afterwards, Will soon finds out that Bright Eyes had just given birth, and she became aggressive as an instinctive attempt to protect her child.

Will saves the young chimp from euthanasia, names him Caesar, and takes him home. The ape immediately displays intelligence beyond his years (and species), which proves he inherited his mother's enhanced intelligence. Through Caesar, Will hopes to keep his work alive — but as Caesar grows older, a chain of events leads him on the path to self-realization and an eventual uprising.

A prequel comic mostly focusing on Bright Eyes was put out as a webcomic/free digital comic in the weeks leading up to the movie's release.

Rise of the Planet of the Apes contains examples of: