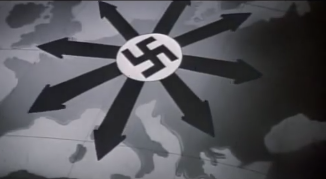 Pictures can be worth a thousand words, and graphics depicting the spread of a threat across the landscape can often convey its scope more effectively than Storyboarding the Apocalypse. Whether it's a Zombie Apocalypse, The Plague, an advancing natural or man-made catastrophe, a World-Wrecking Wave or something more conventional like a military invasion from The Empire, there's no quicker way to show one's audience that an entire region is being overwhelmed than to display a map with rapidly-growing colored blotches or arrows (nearly always red) spreading across it.

Sometimes this is used to illustrate what's actually happening in-Verse, while other times it's done to show what will happen if the heroes don't avert a disaster in time. Ominous contour lines or color-coding to indicate the severity of damage are optional. Often displayed on The Big Board or Ominous Multiple Screens in The War Room / Mission Control. See also Sensor Suspense and Bombers on the Screen.

Inversions might display the outward spread of a positive effect, such as a World-Healing Wave.