Film / The Day After Tomorrow 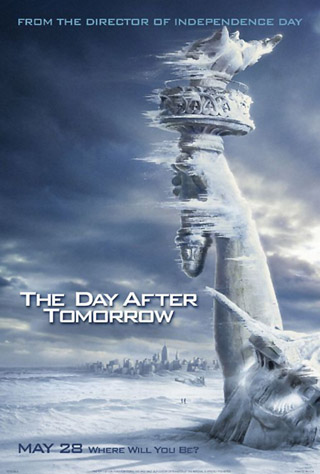 The Day After Tomorrow is a 2004 American climate fiction-disaster film co-written, directed, and produced by Roland Emmerich and starring Dennis Quaid, Jake Gyllenhaal, Ian Holm, Emmy Rossum, and Sela Ward. The film depicts fictional catastrophic climatic effects in a series of extreme weather events that usher in global cooling and leads to a new ice age.

At the center of the story is a paleoclimatologist (a scientist who studies the ways weather patterns changed in the past), Professor Jack Hall (Dennis Quaid), who tries to save the world from the effects of global warming while also trying to rescue his son, Sam (Jake Gyllenhaal) and his friends who are trapped in New York and who have managed to survive not only a massive wave but also drops in temperatures so sudden that they could be killed in seconds.

The film was made in Toronto and Montreal and is the highest-grossing Hollywood film to be made in Canada (if adjusted for inflation).

Also notable that the "science" used in the film is so inaccurate that NASA refused to officially consult with the filmmakers.

Not to be confused with The Day After or the novel by Robert A. Heinlein.