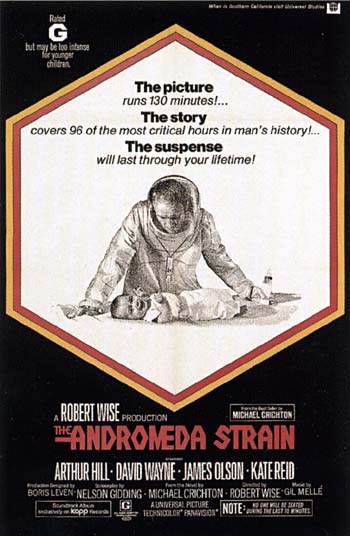 The Andromeda Strain is a 1971 sci-fi/disaster movie based on the novel of the same name by Michael Crichton. Directed by Robert Wise, it stars Arthur Hill (Dr. Jeremy Stone), James Olson (Dr. Mark Hall), Kate Reid (Dr. Ruth Leavitt), and David Wayne (Dr. Charles Dutton) and follows the book closely (except for the names of the characters Leavitt and Dutton).

The Andromeda Strain follows a team of scientists who investigate a deadly disease of extraterrestrial origin, which has already wiped out an entire town, save two survivors.

For its time, the film showed impressive special effects. Computers had advanced pen inputs that didn't behave out of character for the era.