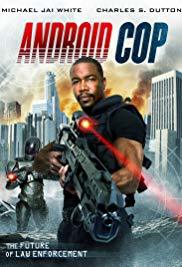 Android Cop is a 2014 American Science Fiction buddy cop film made by The Asylum and starring Michael Jai White.

It's the year 2049, and Los Angeles is a very different place. Androids have been invented, which is good. However, a horrific plague has sealed off a portion of the city, the Zone, which is very bad. Hammond (White) is a cop who has just been assigned an android partner. Unfortunately, their partnership starts with having to find the Mayor's (Charles S. Dutton) android daughter. As they search for the core, they unlock a Government Conspiracy that could rock LA to its very core...