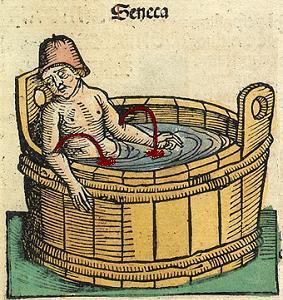 "They went home... and sat in a hot bath... opened up their veins... and bled to death. And sometimes they had a little party before they did it."
— Frank Pentangeli on Ancient Rome, The Godfather Part II
Advertisement:

The act of killing oneself by sitting in a tub and slitting one's blood vessels. The warm water is supposed to encourage the easy flow of blood, so in fiction, it's often depicted as a comparatively painless method of suicide that leaves a relatively unblemished (and thus more dignified) corpse. And the billowing clouds of blood look really cool, too.

Perhaps because of its having been used by the Roman Stoic philosopher Seneca, who killed himself at the command of his former pupil, the emperor Nero (as depicted in the page illustration from the Nuremberg Chronicle), this act has often been associated with characters who are permitted "honorable deaths" or who take this way out as an alternative to submitting to tyranny. On a related note, this is also why "Roman Bath" is a common euphemism for this kind of suicide.

It should be noted that it is damn hard to kill oneself this way in Real Life, due to the body's pain response and the fact that the arteries are buried quite deep in the arm. Therefore, the romanticized "easy" bath suicide is mostly confined to the realm of fiction.

Sometimes a result of being Driven to Suicide, and a subtrope of Deadly Bath. Not to be confused with another popular way to lose your life in a bathtub.

Compare Leave Behind a Pistol and Seppuku for alternative methods of ritualised suicide.

The mixture of blood and water in the tub in the aftermath of this event is not to be confused for a Blood Bath.