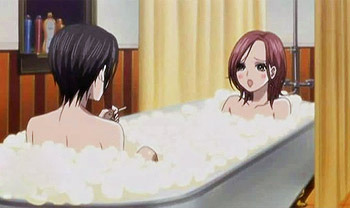 "If you're gonna do shit in the bath, how about some fucking spelling?!"
— Geoff Ramsey, The Off Topic Podcast
Advertisement:

This is when two characters take a bath together and usually converse. This causes them to really get to know each other better or become better friends. Usually either really significant moments of the plot are discussed or one character's past is revealed in a Bathtub Bonding scene.

Most of the time they are Heterosexual Life-Partners; rarely are they ever Platonic Life-Partners, though this can be used if the Platonic Life-Partners in question have enough Unresolved Sexual Tension between them to make them popular targets for shipping and the writer wants to do a scene where said Unresolved Sexual Tension comes to a head. In Japanese, the phrase "hadaka no tsukiai" (裸の付き合い) is used to describe this, and despite literally meaning "a nude outing", one of the definitions listed is "an honest relationship."

At least two characters have to share a bathtub (be it at home, at a hotel, during a Public Bathhouse Scene, or during a Hot Springs Episode) in order to qualify for this trope. Not to be confused with Two-Person Pool Party, which is about two people getting to know each other in a more physical way.