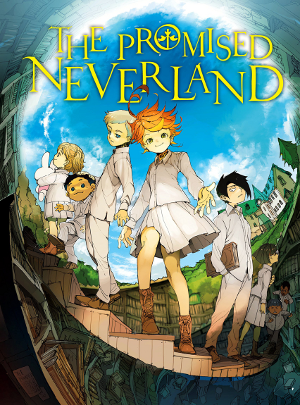 ”Would you leave that person behind? Or take them with us?”
— Norman
Advertisement:

Life is peaceful for Emma, Norman and Ray, three children of Grace Field House, a special orphanage directed by Isabella, a sweet caretaker they all call "Mom". In this house surrounded by a large playground and a forest, children of all origins are raised with love and care, the only constraints being the regular tests of knowledge that establish a ranking by score, and being forbidden to go near the main gate or beyond the forest. Every child is eventually sent away to a foster family sooner or later, but always no later than their twelfth birthday.

Being eleven years old and the top-ranked children of the orphanage, our protagonists know they will be the next to leave after little Conny. But while they thought they would see her off, they witnessed something they shouldn't have, and discovered with horror the "foster family" the children are sent to...

By the way, what was for dinner again?

Now that they know the truth, they will have to find a way to escape from the house and save the other children before they turn into the next dish on the menu. But their once-beloved Mom doesn't intend to make their mission any easier. A battle of wits soon engages.

Started in August 2016, The Promised Neverland/Yakusoku no Neverland (約束のネバーランド) is a Shonen Jump series written by Shirai Kaiu and drawn by Demizu Posuka, mixing an Ontological Mystery with an intellectual battle and a tinge of horror. The battles do get more physical in later parts, but without letting go of the strategic aspects. The manga concluded in June 2020, after 181 chapters, although several bonus chapters were released in the following months.

It should be noted that the series was born in a particular context within the Jump magazine, after several long-running big-hitters ended in rapid succession (Naruto, Bleach, Nisekoi, Toriko, and even the king of long-runners Kochi Kame). Among the many new series that were launched in the hope of bringing new blood, Neverland was one of the few that came out on top, and rapidly gained success. The manga received an anime adaptation by Studio Cloverworks in the Winter 2019 season; the English dub began airing April 13, 2019 at Adult Swim's Toonami block. The second season was slated to come in October 2020, but due to COVID-19 Pandemic, it got delayed to January 7th, 2021. Unlike Season 1, it significantly diverges from the source material.

Tropes found in The Promised Neverland.