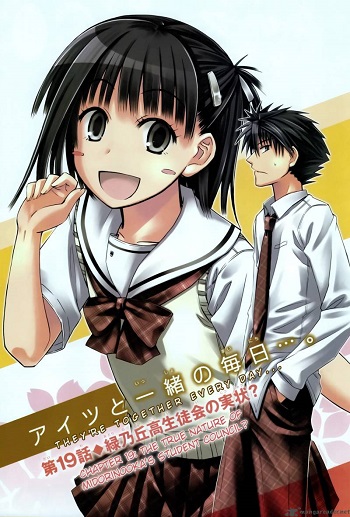 My name is Aikawa Kizuna, and despite how I look, I'm male!
Advertisement:

While looking at the results of his high school entrance exam, Maki has a fated encounter with a cute girl. To his horror, the "girl"—Aikawa Kizuna—happily announces that he's a guy during their class introductions. Aikawa mercilessly teases Maki thereafter about his ambiguous gender—which aside from Aikawa's own claims isn't definitively proven—and an awkward relationship is formed.

Prunus Girl is a shounen manga series by Tomoki Matsumoto which ran in Gangan Joker from 2009 to 2013. An example of Otokonoko Genre.