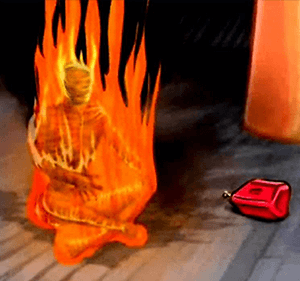 "Those who did not deserve to rule, who would not sacrifice themselves...as they asked others to do on their behalf, would escape the fire. The sacrifice of the one who remained...who believed so much in his caste that he would lay down his life for them...that would determine which caste would be dominant among us."
— Delenn, Babylon 5

When a character sets themselves on fire to kill themselves in a blaze of glory. Truth in Television, as this has been a preferred method of suicide for centuries. Especially in Middle Eastern or Asian culture, it may be done as an act of political protest.

Compare Man on Fire, Murder by Cremation and Wreathed in Flames.