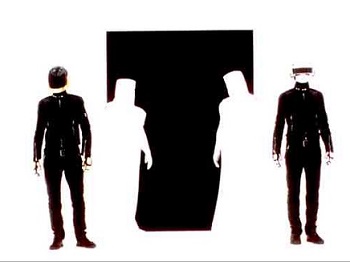 Yes, those white silhouettes are people.
"Because the whole movie is without dialogue, it's more a question than an answer. We wanted to make a question mark so people could project what they wanted onto Electroma – some people see it as sad, some as happy. Everyone is different."
—Guy-Manuel de Homem-Christo, giving an explanation for the film's design
Advertisement:

Daft Punk's Electroma is a 2006 avant-garde Science Fiction film directed by... well... Daft Punk. The film's story revolves around two robots (meant to be separate characters, not the actual band members) who try to become human, setting off on a surreal, very patiently paced, Scenery Porn-filled, and completely dialogue-free journey.

It is the duo's only feature-length directorial effort and their only straightforward film, as their previous visual work had progressively shifted from a music video compilation (D.A.F.T., made for Homework) to a feature-length music video of sorts (Interstella 5555, made for Discovery).

Similarly, Electroma was a byproduct of the duo's 2005 album Human After All, exploring its Central Theme of the dichotomy of man and machine. The film began its life following the completion of the music videos for "Fresh", "Robot Rock" and "Technologic", which the duo also directed. As they moved onto shooting for the music video of the album's Title Track, they decided to extend the footage into a complete feature film, which they then opted to focus on instead of filming videos for the rest of the album. However, aside from the famous helmets of the characters and "Daft Punk" being written on the main characters' jackets, the story has zero relation to any previously established continuity whatsoever.

Initially shown at the 2006 Cannes Film Festival, Electroma was later shown at independent film screenings in France, Canada, Australia and the US. As the duo had predicted, its experimental structure made for divisive reception, with one particularly long sequence causing a number of walkouts at its Cannes premiere. However, a cult status began growing as soon as a year later when more public midnight screenings began, with the film selling out frequently and gaining a wider following.

In 2021, a climactic moment from the film (the sequence where the silver robot destroys himself) was uploaded to YouTube with the title "Epilogue", ahead of an announcement by Daft Punk's publicist that they would be disbanding.