Western Animation / A Grand Day Out 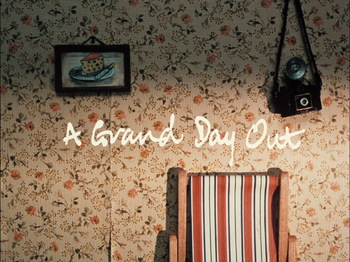 A Grand Day Out is the first short film featuring Wallace & Gromit.

One evening during a bank holiday, Wallace and his dog Gromit settle down for a nice hot cup of tea and some cheese with crackers only to realize they've no more cheese. With all of the shops closed for the holiday, what's their solution? Build a rocket in the basement and take a trip to the moon... which, as everyone knows, is made of cheese. While there, they have an encounter with a coin-operated robot who's desperate to go skiing.

It was released in 1989. It was nominated for the Academy Award for Animated Short Film, but lost to Aardman's other work, Creature Comforts. General character tropes for Wallace and Gromit should be placed here.