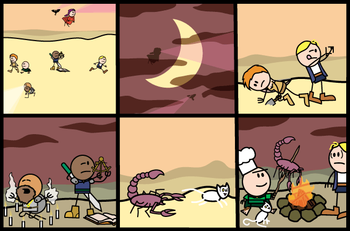 "Industry, science, and technology! Big men sticking screwdrivers into things, and turning them! And adjusting them!"
— Tom Servo, on the construction of the interocitor from This Island Earth, Mystery Science Theater 3000: The Movie

One or more characters is shown working hard at a particular task through a sequence of shots meant to imply time passing. This may often incorporate a signature piece of energetic or heroic music, or the characters themselves will sing as they work.

This includes the A-Team Montage, the Training Montage, and any montage in which somebody does a lot of construction, communication, travel, martial arts training, or scouring many books and files. May be featured in the Forging Scene and other Creation Sequences.

The joyful and optimistic strains of the Adventurous Irish Violins can often be heard in the background of such sequences, especially if the work is one from the Adventure Genre.

Ham, with Judy's assistance, spends the entire night baking the cake for the festival.

Ham, with Judy's assistance, spends the entire night baking the cake for the festival.