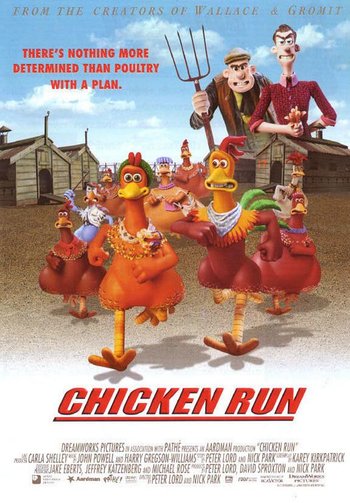 The wildest escape ever hatched.
Chicken Run is a 2000 stop-motion animated film, the first of three collaborations between DreamWorks Animation and Aardman Animations (along with French studio Pathé) and Aardman's first feature overall. It is best described as The Great Escape — with chickens. The film is directed by Peter Lord and Nick Park, and written by Karey Kirkpatrick. It's currently the highest-grossing stop-motion film of all time.
Advertisement:

A ginger chicken named "Ginger" (voiced by Julia Sawalha) is the ringleader in the attempts of the chickens to escape from Mr and Mrs Tweedy's Chicken Farm, a prison where any chicken who fails to lay eggs risks being beheaded and cooked for dinner. Ginger is at her wits' end trying to talk the others into any new escape attempts, (all of which fail and earn her a trip to solitary confinement in a coal bunker). Then a rooster named Rocky (Mel Gibson), who can apparently fly, falls from the sky and agrees to teach the chickens how to fly like him, in return for Ginger keeping mum on his presence.

However, the farm’s owner, Mrs Tweedy (Miranda Richardson), tiring of the low profits selling eggs brings her, decides to convert her business into chicken pot pies. Needless to say, things get drastic in a hurry and Ginger must get the whole coop into the air before they all become mincemeat.

A sequel titled Chicken Run: Dawn of the Nugget, is set for release on Netflix in 2023.

The chickens are building a "crate" with all the supplies they can get, intercut with Mr. Tweedy repairing the broken pie machine.

The chickens are building a "crate" with all the supplies they can get, intercut with Mr. Tweedy repairing the broken pie machine.