Sealed with a Kiss 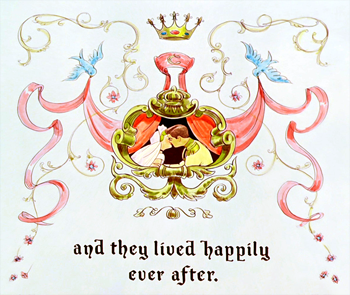 "The curtains close / on a kiss God knows / we can tell the end is near."
— Buffy the Vampire Slayer, "Once More With Feeling"

Chances are good this will precede any ending narration or title card that says "And they lived Happily Ever After."

Being an Ending Trope, it's a given the examples contain SPOILERS. Consider yourself warned.

Sometimes a sub-trope of Last Minute Hookup, or it might happen at a Wedding Finale. Not to be confused with Last Kiss or A Magic Contract Comes with a Kiss.