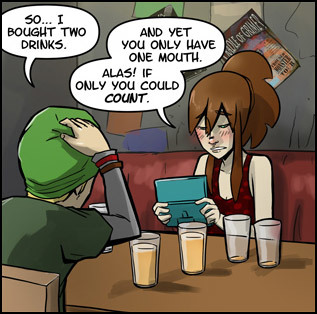 The Deadpan Snarker exists to deflate pomposity, point out the unlikelihood of certain plans, and deliver funny lines. Typically the most cynical supporting character. In most cases, it is implied that the snarker would make a good leader, strategist, or consultant given their ability to instantly see the flaws in a constructed plan. More often than not, their innate snarkiness is the only thing preventing the other characters from comprehending this for themselves. In other cases, the Deadpan Snarker resorts to sarcasm because they're the Only Sane Man. Tends to be shot a Death Glare when they go too far (and probably isn't without one of their own, either). Note that due to the definition evolving, the "Deadpan" part of the title has gradually become The Artifact and a deadpan delivery is no longer a necessary part of the trope.

Sometimes the Deadpan Snarker is shown to be incapable of avoiding sarcasm, due to his insecurity about expressing any genuine thought or feeling, and his fear of withdrawing from the cynical position and protection. This may turn him into a Stepford Snarker.

While the Snarker has existed (in both fiction and Real Life) since time immemorial, its most contemporary incarnation emerged in the early 1930s with the new popularity of sound cinema and the rise of "zinger" comedy. In fact, it was in 1933 that the word "wisecrack" (the Snarker's most trusted sidearm) entered English-language dictionaries. (And, in a stroke of genius, the word "wisecrack" is itself a wisecrack, carrying the sarcastic connotation of "Oh, yeah, you're a real Socrates, smart guy.")

A sub-trope of this is Grade System Snark. Compare The Snark Knight, Little Miss Snarker, Cuckoosnarker, Weasel Mascot, The Mean Brit, First-Person Smartass, Servile Snarker, Gentleman Snarker, Silent Snarker, Disabled Snarker, Mentor in Sour Armor. See also Non-Action Snarker, Snarky Nonhuman Sidekick, Cats Are Snarkers, Tall, Dark, and Snarky, Surrounded by Idiots, and Sarcastic Devotee. Sometimes overlaps with Genre Savvy and No Sense of Humor. A common role for a Straight Man. May wear Jade-Colored Glasses. Expect them to resort frequently to Brutal Honesty. If there are too many of these, you might be in a World of Snark. Overdoing it on one character may result in a Jerkass; even when done in sufficient moderation, however, the character still tends to rely on a certain amount of Jerkass Dissonance (since, well, the audience would probably be less amused by the Deadpan Snarker's biting wit if they were the ones on the receiving end of it). Expect plenty of Snark-to-Snark Combat if and when two of these meet. May result in Offing the Mouth. Try not to confuse the dialogue with Buffy Speak. It's common among narrators, making them into a Lemony Narrator.

Now, as for real life examples... Oh, yeah, right. Someone up there has got no sense of humour.

Boy, I hope you don't mind actually reading a full sentence to know which example subpages you're in for.

Other Examples... or something.

open/close all folders
Advertising
Music
Pinballs
Podcasts
Pro Wrestling
Look at you, you scrolled all the way down just for the stinger. Somebody get this guy a medal.
Feedback