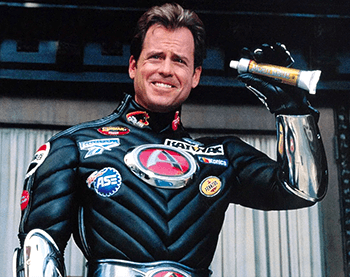 In many superhero works, the big, problematic question is usually "Where DOES he get all those wonderful toys?". Superheroes have to pay the bills, after all, and superheroics isn't really that lucrative. So what's a superhero to do? Well, if you weren't lucky enough to inherit a large fortune and head a major corporation, you can either find a day job or seek out sponsorship for your heroics! While some might turn to the government, others might want to head to the private sector for financing.

Enter the Corporate-Sponsored Superhero! Captain Bland-Name Product is here to save the day, and tell you about all the great deals you can get on insurance to cover the damage incurred by your rescue!

Note that this applies only to heroes with explicit ties to their corporate sponsor. Characters who use funds from their corporation to secretly finance their heroism (Batman, for example) do not count. Expect to see corporate logos printed on tights, advertising appearances, and rampant toy marketing. Also expect the heroes to develop serious qualms about the shilling they have to do, especially if they discover their sponsor in engaging in unethical or criminal activities.

Related to Law Enforcement, Inc. and Heroes "R" Us. May overlap with Punch-Clock Hero if they view heroics as nothing more than a 9-to-5 job to pay the bills. See also Celebrity Superhero.