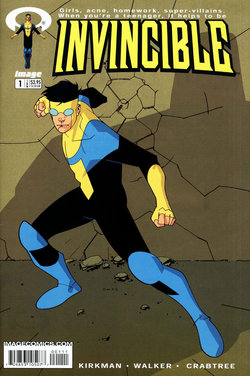 The Best Superhero Comic In The Universe!
Mark: I think I'm finally getting superpowers.
Debbie: That's nice. Can you pass the potatoes?
Advertisement:

Created by Robert Kirkman and Cory Walker, this Comic Book series revolves around the life of Mark Grayson, who is pretty much your typical high school student, except for the fact that he is the son of Omni-Man, the most powerful superhero on the planet. Over the course of his heroic career, Mark, as the superhero Invincible, has fought aliens, joined super-teams and bounced from dimension to dimension. All the while, he has to deal with choosing a college, graduating high school and, of course, falling in love.

Then his dad's species declares total war with the planet Earth.

The series has become well known for combining brightly coloured superheroes with often very dark themes and gorn-laden fight scenes. Very rarely are superhero tropes played perfectly straight, often getting twisted into new directions that give a heave to the status quo. The series began on January 22, 2003, and ended on February 14, 2018.

No relation to the French comic Imbattable which is also translated as Invincible, the 2005 movie about Vince Papale starring Mark Wahlberg, or Werner Herzog's 2001 film about Zishe Breibart, or Michael Jackson's last album.

In 2017, a Live-Action Adaptation was announced, and is still in development as of the beginning of 2022.

In 2018, it was announced that an Invincible animated series would be headed to Prime Video. It began airing on March 26, 2021, running for 8 episodes, and a second and third season have been ordered.

Now has a character page. Please put all character-related tropes there.