When All You Have is a Hammer 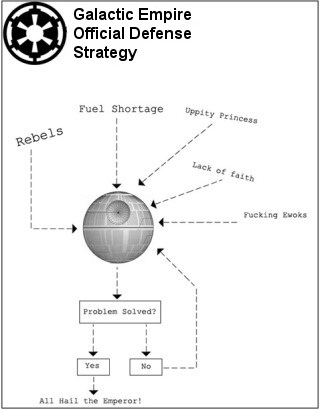 Now that's what I call a hammer!
"I suppose it is tempting, if the only tool you have is a hammer, to treat everything as if it were a nail."
— Abraham Maslow, The Psychology of Science (1966), the Trope Namer
Advertisement:

A character has a limited offensive repertoire, but the writer wants to make them look clever anyway, so they face them off against something which requires a little bit of strategy. Unfortunately, this strategy ends up being "just do what you always do, but slightly better." It's not that our hero is uninventive. They may be an outright MacGyver, but they just don't have much to work with.

Say that Alice is facing against the villain of the week, Bob. She punches him really hard, as she usually does, and... oh no! Bob shrugged it off easily! After realizing what will happen if she tries to fight normally, Alice flees. By the end of the episode, Alice has come up with a genius plan to beat Bob: Punch him really hard in the face.

Sometimes, this is a little more elaborate, and the hero has to do something totally different first, like "cast 'dispel invulnerability' on the other guy." Then they get to fall back on their usual strategy to "punch them really hard in the face."

Occasionally it happens because of complacency; the character does have other abilities/methods to do the job, but they have used "the hammer" so much to be really effective with it, and thus those other methods are largely redundant for them (save for special occasions). Especially true for a given character's Signature Move and especially Finishing Move, or worse, it's part of the work's premise. See Complacent Gaming Syndrome for cases of video game players about this.

A justification can be that there are many ways to arrive at what looks like the same conclusion. For example, all of General Patton's strategies were elaborate ways to shoot stuff with tanks, and all successful modern infantry tactics end the same way: "and then we shoot them/call in the artillery."

This generally happens due to the Inverse Law of Utility and Lethality; the more a character specializes in combat, the smaller the characters' repertoire. If the character is so attached to his 'hammer' that he cannot adapt to, say, a screwdriver, see Crippling Overspecialization.

Damage-Sponge Boss can be a justification for this trope.

The All-Solving Hammer is when this becomes a Running Gag. Can sometimes be related to What Kind of Lame Power Is Heart, Anyway? (and Heart Is an Awesome Power if used creatively) and Death of a Thousand Cuts. See also Plot Tailored to the Party, Smash Mook. Your Answer to Everything may be said about this, and it might be a New Ability Addiction if it's because they just got it. Contrast Every Device Is a Swiss-Army Knife, Swiss Army Weapon and Swiss-Army Superpower when something does have enough functions to tackle a (plausibly) wide range of problems. Can overlap with Quality over Quantity in the sense that skill with one tool beats skills with other tools.

This can often be the calling card of a Invincible Hero, since the lack of challenges which force them to change or upgrade their approach in much any way can eventually make them repetitive in action.

Not related to characters who use hammers as their (primary) weapon unless they use nothing but this hammer at every opportunity.

Also known as the Law of the Instrument, or the "Golden Hammer".

Despite the multitude of her mace's uses, she still hits EVERYTHING in the end. To wit, the mace is made from a special anti-magic metal, so it can even smack GODS upside the head. It backfires in the two-part "Eclipse" where she smashes the jewel that allows some sort of ancient reptiles to possess whoever is holding it. Unfortunately, the Justice League (minus the Flash who was fast enough to dodge them) is then covered in the crystal's shards meaning they are all possessed at once.