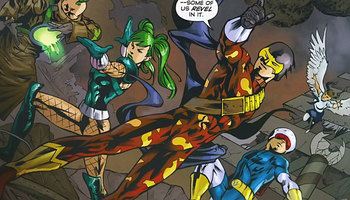 Super Young Team is a Japanese superhero team in the DC Universe. Their first appearance was in Final Crisis Sketchbook #1, created by Grant Morrison and J.G. Jones.

The Super Young Team is a second-generation team of superheroes in Japan. In their civil identities, they come off as fashion-obsessed party-goers, in love with the Tokyo nightclub scene, while in reality, they are powerful superheroes. The team is made up of five members; its leader, Most Excellent Super-bat, a huge fan of Batman and Superman whose power is his extreme wealth; Big Atomic Lantern Boy, Most Excellent Super-bat's second in command; Shy Crazy Lolita Canary, a minuscule girl (small enough to fit in someone's hand) who always wears a Sailor Fuku; Shiny Happy Aquazon, the daughter of Junior Waveman (her mother) and Senior Waveman Otomo (her father); and Well-Spoken Sonic Lightning Flash, a young speedster.

Originally created for Final Crisis, they got their own miniseries in Final Crisis Aftermath: Dance, written by Joe Casey. Since then they've made the occasional cameo, but otherwise haven't done much of importance, although Canary would have a reoccurring role in Batman Incorporated as the girlfriend of Japan's Batman, who would constantly check in to see if Wayne Enterprises had access to shrink ray technology.