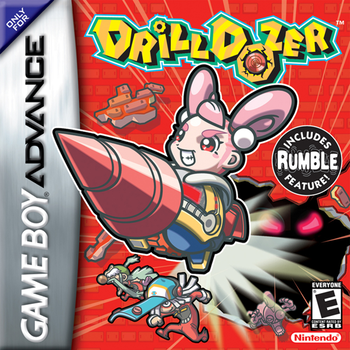 The main character, Jill, is the daughter of the boss of a group of Loveable Rogues called the Red Dozers. The Red Diamond given to her by her now-deceased mother is stolen, and her father is injured, so Jill must go get her gem back on her own, with only her trusty Mecha-Suit-With-Drills-For-Arms Drill Dozer, The Mentor, the Mechanic, and their Base on Wheels to help her.

The game's cartridge is noteworthy for being significantly larger than the standard GBA game, as it has components for a rumble feature.

Not to be confused with the villain Drill Dozer from Hero Factory season 2.