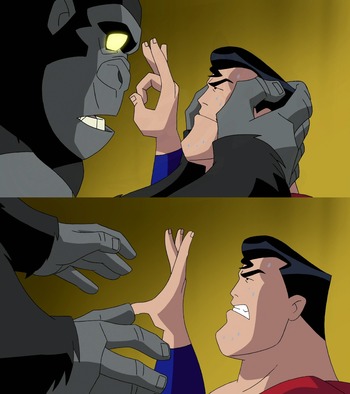 Boop.
Vesper Lynd: If the only thing left of you was your smile and your little finger, you'd still be more of a man than anyone I've ever known.
James Bond: That's because you know what I can do with my little finger.
— Casino Royale (2006)
Advertisement:

The best way to show the amazing power of a character? Simple, have them do something incredible without any effort at all. Give them the power to move mountains, even planets, and thus have them show this power by doing what the heroes (and the audience) would find amazing without even lifting a finger. Or better yet, just a finger.

This tends to accompany the practical demonstration of The Law of Diminishing Defensive Effort. The first or second cousin of The Worf Effect. For a move that is genuinely weak but is still effective, see Cherry Tapping. See also Pressure Point, Touch of Death and Finger Gun.

The trope is named by Professional Wrestling fans after the so-called "main event" between "Hollywood" Hulk Hogan and WCW World Heavyweight Champion Kevin Nash on the January 4, 1999 episode of WCW Monday Nitro. Nash did his damnedest to play up how destructive Hulk's poke was and how he was lucky to have survived (no one was convinced).

For the inversion of this, see Fake Special Attack. Not to be confused with Giving Someone the Pointer Finger.

The next step up is Thought-Controlled Power where you don't even need to move at all to smack somebody around.