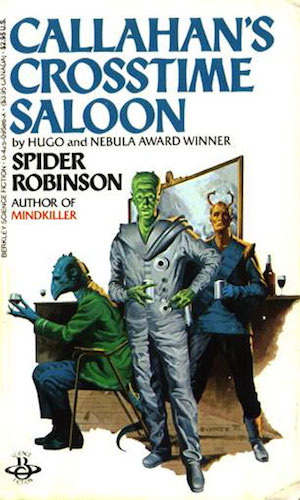 A series of short stories and novels by author Spider Robinson, which has inspired a video game from former Sierra designer Josh Mandel, a sourcebook for the GURPS role-playing game, and even a long-standing online roleplaying newsgroup. The title saloon can only be found if you need to be there. Most of the regulars are ordinary people scarred by tragedies and hardships, finding comfort and joy in their shared company and pun competitions.

The bar also has its share of unusual regulars and visitors, including an android built by aliens bent on world domination, time travelers, a vampire that refuses to prey on humans, talking animals, and a teleporting cat.