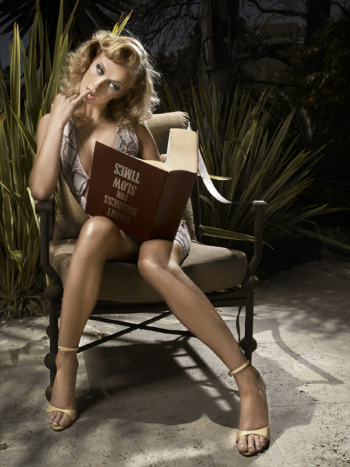 Kicked out of many classes, but never kicked out of bed.
"It was as if some god had said, 'Sorry, kid, you're going to be thicker than a yard of lard, but the good news is, it isn't going to matter.'"
— Sergeant Angua (on Tawneee), Discworld, Thud!
Advertisement:

A specific version of The Ditz: an attractive but stupid character who gets by on their looks. Usually promiscuous (or at least "boy/girl crazy") and popular. Jokes about the character usually revolve around their lack of intellect and effortless romantic abilities. This is a subtrope of Beauty Is Bad.

The Brainless Beauty can be any gender. Female examples (who are usually also The Chick) tend to be classic blonde idiots; male examples, often called "himbos", are Hunks or more rarely Pretty Boys. Neither has much difficulty getting the attention of the opposite sex. The Brainless Beauty is rarely the hero; they tend to be foils for more intelligent (though less successful romantically) characters. Some are sympathetic good-natured dullards, others are presented as annoying obstacles for our heroes. Either way, expect a smart but plain character to be left fuming at the unfairness of it all.

Brainless Beauty protagonists are most common in film (Zoolander, The House Bunny, Blonde & Blonder) but occasionally turn up on TV (Joey).

Contrast with The Vamp and The Casanova, who are also good looking and sexually active but have a lot more going on upstairs.

See also: Popular Is Dumb. It is a reasonably good rule of thumb that most cheerleaders will be presented as being Brainless Beauties unless the movie or show is actually focused on them. The same applies to jocks especially the nicer ones. An Asian Airhead is probably one of these. In a High School setting the Alpha Bitch usually has one of these characters in her Girl Posse though the Alpha Bitch usually isn't one herself because she needs a certain amount of craftiness to maintain her position.

In a sufficiently outlandish comedy, the Brainless Beauty might be literally brainless.

If this trope is set in a High School (or more rarely a university) and a female main character falls under this trope there is a fairly good chance she is secretly smart but employing Obfuscating Stupidity (because Popular Is Dumb) or at least has Hidden Depths. For some reason, male Brainless Beauties very rarely turn out to be secretly smart.