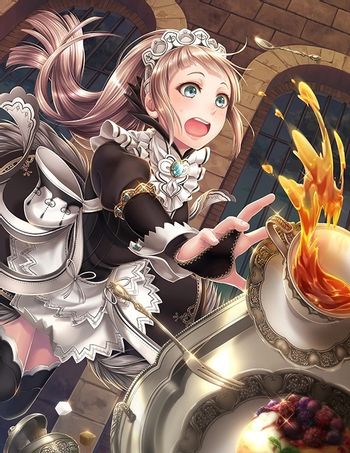 Felicia steps up to (and drops) the plate.
"My, you do take an awful lot of spills, don't you?"
— The Baker's Wife to Cinderella, Into the Woods
Advertisement:

Here's the formula: Take an attractive girl or woman and make her more approachable by adding in some klutziness.

Like many other klutz characters, a Cute Clumsy Girl's clumsiness rarely does her serious harm but can often set off Rube Goldberg-like chain reactions of disasters. She's never seriously injured, though, and she always pops back up with a good-natured, but rueful, smile. It is almost inevitable that at some point her clumsiness will result in a Crash into Hello.

Occasionally, the klutziness pseudo-flaw is used for a male character, but only rarely, as it is not seen as quite as endearing in males. A clumsy male character will more often be used for straight-up Slapstick (and usually will get hurt), perhaps because of a Double Standard relating to Amusing Injuries.

See also: The Klutz (the supertrope) and the fanspeak page Dojikko (for an examination of this character in anime-specific subculture). If the klutziness tends to take care of her enemies without her even realizing it, she is also The Fool. Compare Cuteness Equals Forgiveness. By its nature, this trope tends to go hand-in-hand with Slapstick Knows no Gender.