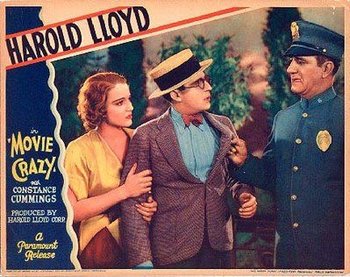 Movie Crazy is a 1932 film directed by Clyde Bruckman and an uncredited Harold Lloyd, starring Harold Lloyd.note Lloyd, who never took a directing credit, wrote in his memoir that he directed the bulk of this film after Bruckman's drinking problem left him incapacitated.

Harold Hall (Lloyd) is a young man somewhere in Flyover Country with dreams of stardom, despite having no obvious acting talent. When he accidentally puts a picture of a much handsomer man in his application letter, he is invited to Los Angeles for a screen test.

Before his screen test, he is grabbed for work as an extra in a movie scene, and meets an exotically beautiful Spanish actress. After bumbling his way through the screen test he meets Mary Sears, a lovely blonde (Constance Cummings) who is a big star for the movie studio that gave Harold an audition. What Harold doesn't pick up on is that Mary Sears and the Spanish actress are actually the same person—Mary was in makeup and costume for a part. Meanwhile, Harold's quest for film stardom leads to a series of comic misadventures.