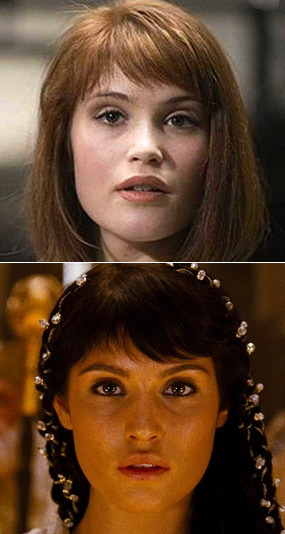 Gemma Arterton as an Englishwoman in Quantum of Solace and as a Persian in Prince of Persia: The Sands of Time.
Dev: The Indian dude [in Short Circuit 2] is a white dude. That's Fisher Stevens. They used brownface makeup.
Ravi: Wait, what?
Dev: Yeah. They got a real robot and a fake Indian.
— Master of None, "Indians on TV"
Advertisement:

White actors pretending to be members of ethnicities that typically have tan skin such as Native Americans (sometimes called "redface" in this case), Latin Americans, Polynesians, South and Southeast Asians, Middle Easterners, or North Africans. This is often done with makeup or tanning, and sometimes hair dye.

Brownface is seen more often than yellowface and blackface in modern productions. Lately, Hollywood prefers casting actors who look enough like Native Americans without using makeup when actual Native American actors aren't used. This is even more common with Latino characters, who have a greater latitude due to the fact that there are Indigenous, Mestizo, Black, White, and Asian Latinos.

There are basically three ways that this Trope is played:

A mixture of the three can be employed as well. No 1 is straight up considered offensive these days, while No 2 and 3 are controversial; particularly with the latter due to the fact South Asian/Arab/Native/Latino/Brown actors in general are rarely given roles that aren't stereotypical.

This is a subtrope of Fake Nationality. Occasionally used as a method for creating Human Aliens.