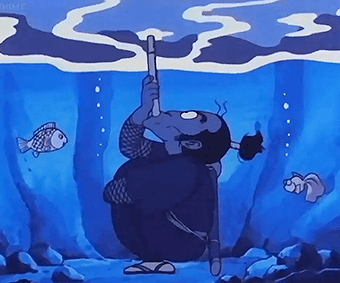 Elf: How do you know these reeds are hollow?
Kevyn: Reeds are always hollow.
— Schlock Mercenary
Advertisement:

Plucking a hollow reed and using it to breathe while underwater. Often but not exclusively employed by Ninjas in fiction.

This is an example of Reality Is Unrealistic: the major problem is not the pressure, which only becomes a problem as you go really deep (most people are swimming just a few inches below the water, hardly low enough to crush your lungs), but that the width of the reed (or snorkel) needs to get wider the longer the tube isnote Imagine drinking a drink from a glass through a really long straw — you'd need to suck several times just to get the drink to your mouth — air through a reed would be the same deal.. Otherwise you are just rebreathing the same air over and over, which will kill you after long enough. Unless you breathe out into the water — and if you're trying to hide underwater, that defeats the purpose by highlighting your position with bubbles. Hmm... maybe you could do it with two reeds.

Sneaking aboard the Merry

Zoro and Usopp "sneak" aboard the Merry using makeshift snorkels.

Sneaking aboard the Merry

Zoro and Usopp "sneak" aboard the Merry using makeshift snorkels.