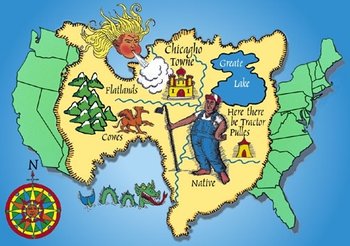 Beware...
"A couple of guys in first class on a flight
From New York to Los Angeles
...30, 000 feet above, could be Oklahoma
Just a bunch of square cornfields and wheat farms
Man, it all looks the same
Miles and miles of back roads and highways
Connecting little towns with funny names
Who'd want to live down there in the middle of nowhere?"
— Jason Aldean, "Fly Over States"
Advertisement:

Where do you live? New York? Awesome. L.A.? Awesome. Kansas City? Uh... where is that, like, in Idaho or something?note  The name is a clue; it's in Missouri, of course. Well, about three quarters of it, anyway. There are actually two cities named "Kansas City", with State Line Road marking the division between the two. Usually it's the Missouri one (or the metropolitan area as a whole, including cities like Liberty and Independence on the Missouri side and Overland Park and Shawnee Mission on the Kansas side) people are referring to rather than the Kansas one.

That's Flyover Country, also known as "the Heartland" or "Middle America" note  which are not necessarily the same thing; see You Keep Using That Word for further details —American slang for the states which trendy liberal Bourgeois Bohemian coast-dwellers see only from the window of an airplane as they jet to their vacation or a work trip on the opposite side. Containing roughly half the country's population (if you're using a narrower definition) but much more of its landmass, this region includes everything between Las Vegas note  although the area between the Sierra Nevadas and the Rockies is more properly termed "the Great Basin" and is culturally either Latin American Catholic or Anglo-Saxon Mormon, in marked contrast to the largely German Protestant or Scandinavian Lutheran character of the upper Midwest, Slavic and Italian Catholic character of the Great Lakes, the Scots-Irish Baptist or Anglo-Saxon Protestant character of the lower Midwest, Slavic Jewish or Southern European and Germanic Catholic character of the East Coast, Latin American Catholic or Anglo-Saxon Protestant character of the West Coast, and the Scots-Irish and West African Baptist character of the South. and Chicago at a minimum—and is often extended to everything east of the Sierra Nevada and west of the Alleghenies (if not the Hudson River). This famous (and oft-parodied) Saul Steinberg cover

◊ for The New Yorker magazine's March 29, 1976 issue, known as "View of the World from 9th Avenue", parodies the stereotypical attitude of parochial New Yorkers to the rest of the country.

Sparsely populated, largely rural, and perceived to be lacking in photogenic glamor and urban coolness, it rarely shows up in works which attempt to appear trendy or up-to-date. It gets much more play in political circles, however, as the quirks of the American electoral system make appeals to smaller states essential. When one talks about the "red state/blue state" divide in American politics, this is what is meant by "red state" — conservative-leaning rural/suburban areas where Walmart, chain restaurants, church, high school football, and the Republican Party are pillars of local communities. The phrase "flyover country" was, in fact, coined by right-wing talk radio hosts, to ridicule their imagined concept of what latté-sipping coastal liberal elites thought of the American interior.

With that said, that "ridiculous, imagined concept" is in many ways far closer to the truth than many "coastal liberal elites" would care to admit, with New York- and Los Angeles-based media having a nasty habit of writing off everywhere between the Appalachians and the Rockies as hopelessly backward redneck country whose lot in life would be vastly improved if they would just do what said media think they should, with no real understanding of the life or issues in that part of the country, and as such not even worth listening to because of course they're all racist hicks with no redeeming values. As noted elsewhere in this article, there is a great deal more ethnic and political diversity in Flyover Country than fiction would have you believe, and many of its denizens — particularly its Democrats — deeply resent being written off this way.

Setting a show or a novel here can be shorthand for '50s-style social conservatism (and the common portrayal of this region by Hollywood in the actual Fifties did nothing to help), small-town insularity, or a crushingly unhip, even dorky ambiance — think Pleasantville or Napoleon Dynamite. However, it gets used at least as often to inspire nostalgia for Eagleland Flavor #1, a friendly, down-home environment full of old-time family values where all the women are strong, all the men are good-lookin' and all the children are above average.note It should be noted that the above slogan is used by humorist Garrison Keillor to describe the fictional town of Lake Wobegon, which is in the state of Minnesota—which, amusingly, is usually considered a solidly blue state (Michele Bachmann—who represented a carefully gerrymandered district—notwithstanding). (Think Smallville, Friday Night Lights, or an '80s Spielberg/Amblin movie.)

The truth is a little more complicated. While the states of the central U.S. do skew more rural than urban, the major cities therein are as cosmopolitan as any coastal town, with their own brand of culture, style, and nightlife. They also have a much lower cost of living than the coasts—even Chicago, the great metropolis of the Midwest, is cheaper than NYC or LA (although not by much). And even some of the smaller towns, like Boulder, Coloradonote where Mork & Mindy was set and Ann Arbor, Michigan,note home of the University of Michigan have their own quirks. There are very few states in the US that don't have at least one significant metropolitan area (likewise, New York State and California both have conservative rural areas of their own).

Politically, these cities tend to be much more liberal—socially and economically—than the surrounding region. Many of them are (or were) industrial towns with a strong presence of labor unions and minorities, plus college students who stuck around after graduating. In fact, people in the surrounding, rural areas who don't fit in with the arch-conservative lifestyle will tend to relocate to the nearest decent-sized city. These factors frequently produce Democratic islands within states that are otherwise Republican strongholds. Many don't realize that Milwaukee was one of the hotbeds of the Socialist Party up until the second Red Scare, and while North Dakota does lean to the right, it has a publicly-owned banking system

unique in the nation.

Culturally, the flyover region is a lot more diverse in religion and ethnicity than popular folklore tends to credit it. Most people are aware of the large African-American and Latino populations within the cities, but these cities receive immigrants from all over the world. For example, the Detroit suburb of Dearborn has had a healthy Arab population for over a century, and it's home to the largest mosque in North America; the Minneapolis-Saint Paul area contains the largest Hmong and Somali communities in the country; and several Native American reservations are located in Minnesota, Wisconsin, Montana, and the Dakotas.

These nuances and many more tend to be lost on Hollywood. Shows based in one of the coasts will lovingly show details of the landmarks and locales, while Midwestern locations are either fictionalized or used as a generic backdrop. For example, Sex and the City used real-life bars and restaurants in NYC as the girls' hangouts. Meanwhile, Garry Marshall, the producer of Happy Days and its Spin-Off Laverne & Shirley, never set foot in Milwaukee until long after both shows ended, leading to a horrifically inaccurate portrayal of the city that may have hurt its actual economic and cultural growth.

That all said, the depiction of the geographic landscape outside the cities can be quite accurate. The Midwest produces substantial portions of the global supply of corn, wheat, and soybeans (among other crops), so fields in every direction as far as the eye can see is an absolute truth for much of the area. Furthermore, large parts of it are very flat with no more than some low hills (there's a reason the center of the country is called the Great Plains), but flatness is not universal.

As mentioned above, if a show is actually based in one of the cities here, whether or not it's a subversion of this trope depends on how much research the writer has done. However, the following tropes and locales of Middle America feature highly in the media:

The rough Australian equivalent to Flyover Country is the Outback or, more broadly, the areas outside the "capital cities".

The American South (the former Confederate States of America), settled by Englishmen and Scots rather than Germans, Scandinavians, and Irishmen, is similar to Flyover Country but not exactly identical, and is sometimes treated as Flyover Country in media, sometimes not. For information on the Southern lowlands, settled by the West Country English (and by Africans they imported as slaves), see Deep South; for the Southern highlands, settled by the Scotch-Irish, see Appalachia.