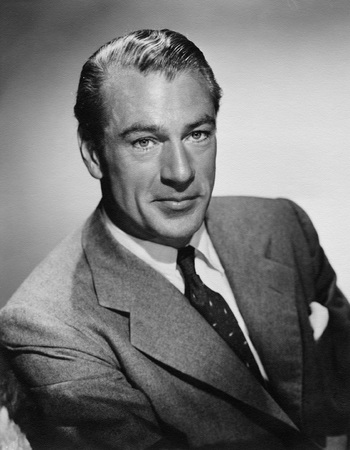 "Whatever happened to Gary Cooper, the strong, silent type? That was an American. He wasn't in touch with his feelings. He just did what he had to do."
— Tony Soprano, The Sopranos
Advertisement:

Gary Cooper (born Frank James Cooper; May 7, 1901 – May 13, 1961) was one of the most popular American leading men during The Pre-Code Era and The Golden Age of Hollywood.

Cooper was born in Montana, the child of English immigrants. As a young man, he managed his parents' ranch and drew editorial cartoons for a Helena newspaper before moving to Los Angeles in 1924, following his parents. Shortly thereafter, Cooper started getting work as an extra, and in the late silent era started getting featured roles, including a small part in the first film ever to win Best Picture, Wings. His first sound film, The Virginian, made him a star. Cooper typically portrayed taciturn, slow-talking, square-jawed heroes from Middle America. He played a lot of cowboys and sheriffs in westerns. Offscreen, he was also well known as The Casanova, having affairs with many of his female co-stars.

Cooper had a relatively narrow range, almost always playing romantic leads or action leads, but was praised for his understated acting style and screen performances, which made him appear natural and authentic on screen. He was nominated for five Oscars, winning the Academy Award for Best Actor for Sergeant York and High Noon. He made over 100 films, working until shortly before his death from cancer in 1961, having just turned 60.

Gary Cooper films with pages on this wiki include: