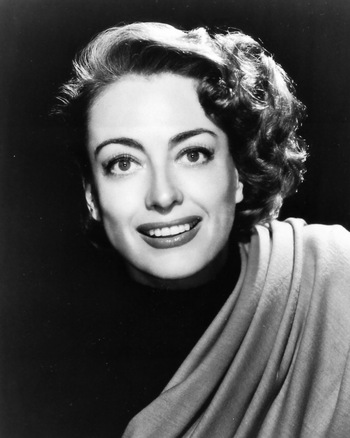 "If you've earned a position, be proud of it. Don't hide it. I want to be recognized. When I hear people say, 'There's Joan Crawford!', I turn around and say, 'Hi! How are you?'"
Advertisement:

Joan Crawford (born Lucille Fay LeSueur; March 23, 190?note Historians debate on the year of her birth, with 1904, 1905, 1906 and 1908 being written into history books. Considering Hollywood studios enjoyed changing the ages of their stars for more audience appeal (on top of her birth records becoming lost over the years), fans (and gossip magazines) at the time claiming she was born in 1906 were possibly wrong, too. Crawford herself claimed she was born in 1908, which is the year used on her tombstone. Her daughter Christina, however, used 1904 twice in Mommie Dearest (1978). – May 10, 1977) was an Academy Award-winning American actress who rose to stardom during The Golden Age of Hollywood, and was well known both for her commanding screen presence and for her sordid offscreen love life.

Crawford was born in San Antonio, Texas, and worked to overcome her upbringing in a broken home (where her mother constantly remarried and she never met her birth father). At the age of 12, she enrolled in Rockingham Academy in Kansas City, and claimed she was beaten by a headmaster who made her work more than study. As a young adult, LeSueur began performing in dance contests and chorus lines, and was approached by a producer in Detroit who gave her more work in New York City, which eventually led to her getting the chance to screen-test for a role with an MGM film. Subsequently, LeSueur was given a contract to work for MGM, and arrived in California in 1925.

From that point on, she appeared in a number of silent films over the next three years. At the same time, MGM held a contest to select a new Stage Name for her — the winning entry was Joan Crawford. Newly rechristened, Crawford garnered larger and larger roles until her breakout role as Diana Medford in the 1928 film Our Dancing Daughters. From that point on, Crawford went on to become a superstar, and was known for her flapperesque personality traits (later transitioning into a sophisticated persona) and commanding screen presence.

During her peak, Crawford was also involved in several high-profile marriages and affairs. She first began a Romance on the Set with Clark Gable on the set of 1931's Possessed (and continued it, even after MGM told her to stop). At the same time, she married the actor Douglas Fairbanks Jr. (the son of Hollywood royalty) and divorced him four years later amid accusations of verbal and mental abuse. She married another actor, Franchot Tone, in 1935, but the relationship was rocky, due to Crawford trying use her own profile to boost her husband's career, something Tone felt notably awkward about, as he was not interested in being a star, merely wanting to just be an actor, and the fact that they tried for children twice, but both attempts ended in miscarriage. Tone allegedly began drinking and became physically abusive towards her, and she would file for divorce in 1939. Two further marriages followed (to actor Phillip Terry and soft-drink company executive Alfred Steele), and it was during this time that she chose to adopt several children after being informed that she wouldn't be able to bear children. Her and Tone later rekindled their friendship, and when Tone was diagnosed with with lung cancer, Crawford would be the one who cared for him in his final years as the cancer turned terminal, and she would also be the one who supervised his funeral arrangements when he eventually passed away in 1968.

From 1925 to 1937, Crawford starred in a minimum of three films a year, and amassed a total of over 200 roles by the time she died from a heart attack in 1977. Most modern audiences, however, likely know of Crawford through her portrayal in the 1978 book and 1981 film Mommie Dearest. The book, which was written by her adopted daughter Christina, characterized Crawford as an alcoholic and sometimes mentally unbalanced mother who beat her children for minor things, had them do gardening chores in the middle of the night and was easily prone to angry outbursts. This account was later denied by her two younger children and many of her co-stars, but supported by several other stars who had known Crawford.

Crawford is portrayed by Jessica Lange in the 2017 FX series Feud: Bette and Joan, which depicts her rocky relationship with the aforementioned Bette Davis during the filming of What Ever Happened to Baby Jane? in 1962.

Having appeared in many films for both Metro-Goldwyn-Mayer and Warner Bros., the latter now owns the rights to the films she made for the former in addition to the ones she did for the latter.

Tropes embodied by Crawford's works include:

References in other works: