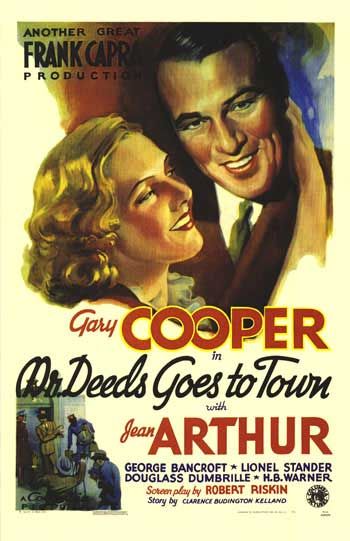 "People here are funny. They work so hard at living they forget how to live."
— Longfellow Deeds
Advertisement:

Mr. Deeds Goes to Town is a 1936 classic film directed by Frank Capra, which won him the second of three Academy Awards.

Gary Cooper stars as Longfellow Deeds, a smalltown tuba player who is suddenly left a massive fortune by his rich uncle. He moves to the big city, where everyone wants a piece of his fortune. Intrepid Reporter Babe Bennett (Jean Arthur) meets Longfellow, initially exploiting his simpleness to advance her journalistic career but gradually finding herself falling for him. However, it's the Deeds family attorney, the scheming Mr. Cedar, whose greed will provide the biggest obstacle for Mr Deeds.

It was remade, quite loosely, as the 2002 Adam Sandler vehicle Mr. Deeds.