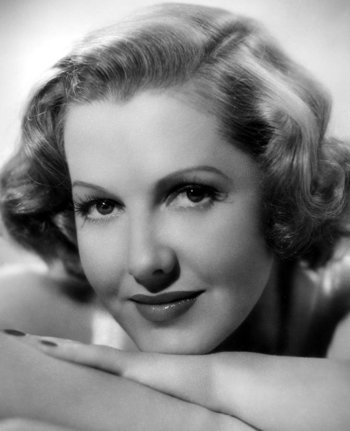 Jean Arthur (born Gladys Georgianna Greene; October 17, 1900 – June 19, 1991) was an American film actress who began her career in silent films, but is best known for her comedic roles during The Golden Age of Hollywood. She starred in many films; most famously as Frank Capra’s favorite wise-cracking, witty, down-to-earth women in Mr. Smith Goes To Washington and Mr. Deeds Goes to Town.

Moving from various studios (Fox, Paramount) in the twenties and early thirties, Jean found a home at Columbia Studios. Unfortunately, Columbia was headed by the notorious penny-pincher and all-around Scrooge Harry Cohn, who repeatedly angered Arthur with lousy roles and needless suspensions—and, she implied to writer and film historian Joseph McBride

, included her among the list of actresses he would routinely sexually harass. But during this time, she made her best films, and claimed the throne as the comedic leading-lady. While she never won an Academy Award, she was nominated for Best Actress for her role in The More the Merrier.

Arthur was considered a recluse and rarely did interviews. She was naturally shy and never found the appeal of Hollywood fame. Asked if she would like to have an interview, Arthur replied, "Quite frankly, I'd rather have my throat slit." She also suffered from immense stage fright, making her seem aloof or cold; however, her screen presence said the opposite: warm, outgoing, and inviting.

After filming George Stevens' Shane, she retired from the silver screen and went on Broadway; however, her insecurity would often get the best of her.

Her last days were spent in her home in Carmel, California. She died at the ripe age of 90.