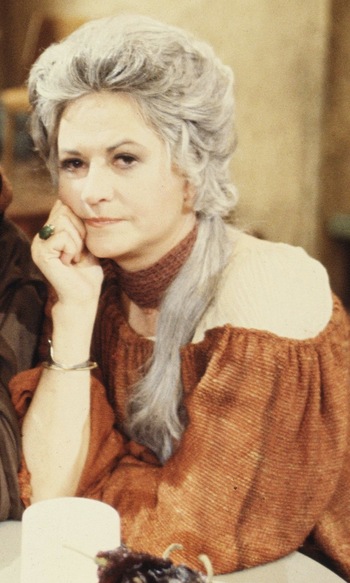 Goodnight, but not goodbye.
"My dream was to become a very small blonde movie star like Ida Lupino and those other women I saw up there on the screen during the Depression."
Advertisement:

Beatrice "Bea" Arthur (born Bernice Frankelnote According to Arthur she went by "Bea" her entire life, presumably switching her stage name from Bernice to Beatrice because "Bea" was a typical nickname for the latter but not the former; "Arthur" is a modified spelling of "Aurthur", the surname of her first husband.; May 13, 1922 – April 25, 2009) was an American actor, comedian, and singer whose career spanned seven decades. She was well-known for her amazingly droll, dry, deadpan delivery, and a strong case could be made for her as the all-time Deadpan Queen. She's best remembered for her roles as the title character on Maude (a Spin-Off of All in the Family, where she originated the role) and Dorothy on The Golden Girls, both of which earned her Emmy Awards. She even headlined her own hour-long variety special

in 1980, and had numerous other roles during her career, from television to film to theater.

Arthur was also the reigning champ of the Reaction Shot and Death Glare, with TV legend Norman Lear reportedly saying that she could get more laughs out of an audience by raising an eyebrow than most actors could with three pages of dialogue. It was well known that she Does Not Like Shoes.

She also appeared as Ackmena in The Star Wars Holiday Special, and was the only member of the cast who didn't regret her part in it, though this may be due to the fact that she was not informed of the special's (loose) relation to the Star Wars franchise at the time of filming; she was quite used to doing all sorts of variety shows

in The '70s and Early Eighties. To this day, her performance is considered the high point of an otherwise disappointingly terrible special.

Given Arthur's hugely varied career it's no surprise that she didn't like to stand still for too long; both Maude and The Golden Girls ended production because she wanted to move on (in the latter case they convinced her to stay on for a seventh season, and attempted a Retool to carry on without her after she left). After leaving The Golden Girls in 1992 she would not commit to a regular role in any production — stage or screen, big or small — for the rest of her life.

Fun fact: She had a very similar face to Jane Ross, who played the character Tamoon in the Star Trek: The Original Series episode "The Gamesters of Triskelion". Even after Ross died in 1985, several sources mistakenly credited Arthur for the role and mistakenly said Ross was a pseudonym Arthur used. In 2001, Arthur set the record straight that she and Ross were different people and she had never appeared in Star Trek.

She even made an appearance (as herself) on an episode of Judge Judy. Oh, and she was also a truck-driving Marine during World War II. Is it any wonder that she is my angel and the sexiest woman ever?