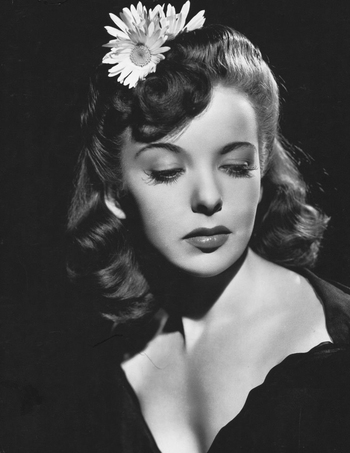 Ida Lupino (4 February 1918 – 3 August 1995) was a British actor, writer, director, and producer who rose to moderate stardom during The Golden Age of Hollywood and was the only female director working in the business during The '50s.

Ida grew up in London, born into English show business royalty; her mother was an actor and her father a famous vaudevillian, and the Lupinos had a rich family tree of entertainers spanning back to the Victorian era. Queen Victoria called them “The Royal Family of Greasepaint," and they were friends with the likes of Charles Dickens and the writer of Peter Pan, J. M. Barrie.

Starting the family trade at an early age, she enrolled in London’s Royal Academy of Dramatic Arts, and although only thirteen, she was named the "British Jean Harlow" due to her remarkable sensuality on screen. In 1934, she came to Hollywood (Paramount studios) at sixteen to play Alice in the 1933 version of Alice in Wonderland, but she proved to be too “old” for the part. Nevertheless, she signed a 5-year contract with them. For several years, she played ingénues and quickly became dissatisfied with these roles. In 1940, she signed with Warner Bros. and starred in a slew of great films including Raoul Walsh’s High Sierra (alongside Humphrey Bogart) and They Drive by Night as embittered gun molls or femme fatales.

During her Warner years, she was constantly suspended for refusing roles she believed beneath her. However, her suspensions enabled her to observe the behind-the-scenes of film-making and piqued her interest in directing. In 1949, Ida, alongside her husband Collier Young, created their own production company called The Filmakers. Here she produced, wrote, and directed many of her films and had the distinction of being the only female director of her era. Her films tackled Ripped from the Headlines stories that dealt with unwanted pregnancies, rape, and grisly murder. She would act on the side to help keep her company afloat, but unfortunately, although her films were profitable, the company failed, and she would move to producing and directing TV shows during The '60s and continued well into The '70s.

She died in 1995 from heart failure, having paved the way for other female directors in Hollywood, but with no proper recognition until after her death.