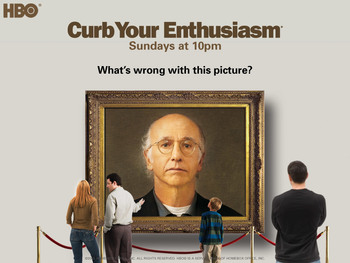 Deep inside, you know you're him.
Advertisement:

Remember that episode of Seinfeld where George pitched his idea for a show in which nothing happens? Curb Your Enthusiasm is that show.

In a typical episode, Larry casually offends someone in the first act, then discovers that he desperately needs their help in the second, and then makes matters worse trying to secure it in the third. Usually, he acts like such an unrepentant jerkass to everybody he meets that when there's a genuine misunderstanding, he can't convince anybody of his innocence. Of course, this varies from one episode to the next. Sometimes, Larry is the more-or-less hapless victim of circumstance; sometimes, he makes all the worst possible choices on the way to his comeuppance. Either way, the comeuppance is the punchline to the show, and will be saved for the very end.

Initially beginning as a one-off HBO special in 1999 — coincidentally just a year after Seinfeld ended, and a decade after that show's own initially one-off NBC pilot special premiered — Curb ran for eight seasons from 2000–11, then went on hiatus until a long-awaited ninth season premiered in 2017. A tenth season came out in 2020, with an eleventh premiering in 2021.