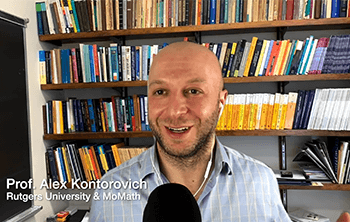 "Did you really read all these books or are they just for show?"
— Bill Corbett, RiffTrax, Superargo and the Faceless Giants.
Advertisement:

Bookshelf of Authority is posing an interviewee or character in front of a bookshelf to show that they're smart.

Extra points if the interviewee or character wrote some or all of the books.

This Appeal to Authority is common in documentaries, mockumentaries, and sometimes when a scientist or academic character is shown being interviewed or just speaking in a drama or comedy.

Giving instant (sometimes undeserved) credibility, the Bookshelf of Authority implies that the person speaking is an expert because they own books.

If the subject is a lawyer, they're law books. Fun fact: some law firms have fake law books on shelves just for appearances. Lawyers look up everything online now with services like Westlaw and Lexis Nexis.

The digital version of this trope is the subject speaking in front of multiple computer screens (with different things on each screen). Another variation is posing in front of shelves of vinyl albums, videogames or other physical media if the person has something to do with what they're standing in front of.

The smart person in question may also be a Bookworm, have read from the Genius Book Club, have something to prove, and/or be faking intelligence.