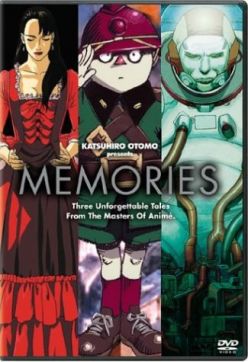 Memories is a set of three anime episodes adapted from three of Katsuhiro Otomo's manga short stories. Katsuhiro Otomo produced the film, but each of the episodes was directed, scripted, and had music composed by a different team, giving each episode a different style. It was released in Japan on December 23, 1995.

The three episodes are:

Magnetic Rose, directed by Koji Morimoto from a screenplay by Satoshi Kon, with music by Yoko Kanno. It's set in space, where a presumably abandoned space station gives out a distress signal. Two men from a spaceship go to investigate, and find much more than they bargained for.

Stink Bomb, directed by Tensai Okamura from a screenplay by Katsuhiro Otomo, with key animation by Yoshiaki Kawajiri and music by Jun Miyake. A Black Comedy featuring a worker from a bioresearch facility, a weapon of mass destruction, and a lot of chaos.

Cannon Fodder, written and directed by Katsuhiro Otomo, with music by Hiroyuki Nagashima. Uses a unique animation style to give the illusion of being filmed in one long take. The story centers on the residents of a city of cannons that is forever at war.

Has a Spiritual Successor in Short Peace, also produced by Otomo.