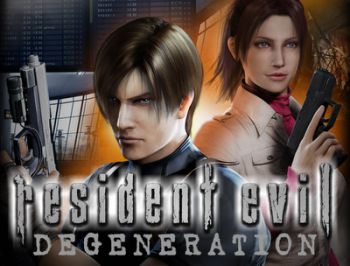 Resident Evil: Degeneration is a CGI film released in 2008 by Capcom as part of the Resident Evil continuity. It should not be confused with the live-action films.

The film is set in 2005, seven years after the destruction of Raccoon City, one year after the events of Resident Evil 4, and brings back the main characters of Resident Evil 2. Claire Redfield, after the events of Code: Veronica, has decided she isn't suited for actively combating Umbrella and its bioweapons, instead joining a non-government organization known as "Terra Save", which both opposes bioweaponry and conducts search and rescue of chemical and bioterrorist attacks. She goes to an airport to chaperone a little girl with missing parents when zombies suddenly infest the terminal. With only a few suvivors, the military calls in an expert on these kind of situations to stage a rescue mission: Leon S. Kennedy. Hilarity Ensues. Then not so much.

Unlike the live-action Resident Evil movies, this one actually takes place in the continuity of the games.