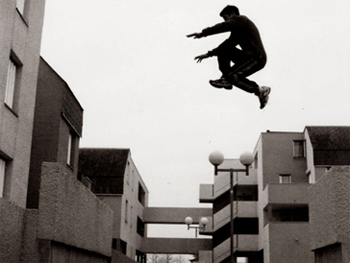 Able to leap between buildings in a single bound!
"Parkour!"
— Ray Narvaez Jr whenever making the slightest jump
Advertisement:

Parkour (and its similar offshoot free-running) is a physical discipline originating in France, more specifically, a suburb of Paris called Évry (although it's worth noting that the inventor's father/teacher was born in French-controlled Vietnam). It can be summed up as either acrobatics meets assault courses or skateboarding without a board.

Parkour is based on general principles of survival: Should one ever need to get from Point A to Point B as fast as possible, the shortest distance is always a straight line. The goal, therefore, is to get past, over, under, or through various obstacles without wasting any time. And it just happened that Évry's central agora is an incredible mishmash of stairs, decks, catwalks and roofs at different heights — and thus, the best way to go in a straight line from A to B in Évry was jumping and running through obstacles. (As of today, the nearby suburbs of Courcouronnes and Lisses have "parkour parks", like skate parks made for practicing parkour).

Parkour practitioners (called by gender-specific nouns, following the original French; a male Parkour runner is a traceur, a female is a traceuse; referring to multiple practitioners uses traceurs) run their environment like an obstacle course: vaulting obstructions, leaping gaps, running up walls, wall jumps, and otherwise taking wild shortcuts. Although commonly associated with cities, Parkour can be used to navigate any type of environment. Traceurs will tell you their discipline becomes a mindset over time. They learn to unconsciously scan their surroundings for routes and movements. Think The Tetris Effect after playing Assassin's Creed or Mirror's Edge. Plus, it not only looks damn cool, but is practical, and may prove to become a more widely practiced discipline similar to martial arts.

The obvious example of Parkour usage is moving from point A to B, but the core idea is simply to make yourself more practically agile and more able to overcome physical obstacles. A mundane example is accidentally throwing something (e.g. a football) on a rooftop and needing to recover it. A practitioner of Parkour would be able to get onto the roof, get the object and get down safely.

The practice of Parkour actually predates the use of that term to describe it. It is a refinement of human movement rather than a brand new skill, the movements have been practiced in various ways for a long time. For example, stuntmen and martial arts film actors have been doing similar things for years, a good example being Jackie Chan.

Not to be confused with its counterpart, "Free Running", which is similar but with a difference of "form" over "function." One of the central "rules" of Parkour is that it is not a competitive sport, and emphasizes efficiency, self-discipline, and oneness with the surroundings, whereas "free-running" is based on stunts and acrobatics that can be done in one location, just for the hell of it, and may include extra flips and spins that are functionally superfluous (and energy inefficient) but look damn cool. Note that often, traceurs will be able to and will perform flips and the like and can be considered both a traceur and a free-runner. The main distinction of traceur and free-runner is in the mindset of the person.

Parkour has begun to appear more frequently in TV shows, owing to its growing popularity. Its moves are commonly employed by martial artists, notably Ninja and practitioners of She-Fu. With special effects and wirework, it becomes an even more impressive feat than it already is. That could be considered proof positive that movie producers are dedicated to missing the point, because Parkour is cool because it is real. Many new video games employ it to expand a player's platform hopping repertoire.

A realistic version of Roof Hopping — most Parkour is done at or near ground level, because that's where one encounters the most obstacles. If used well this can be a great help to a person running a Mobstacle Course.

For the use of parkour in combat, see the subtrope Combat Parkour.

A chase in Mos Espa

Fennec gives chase to masked assassins with a bit of parkour in Mos Espa.

A chase in Mos Espa

Fennec gives chase to masked assassins with a bit of parkour in Mos Espa.