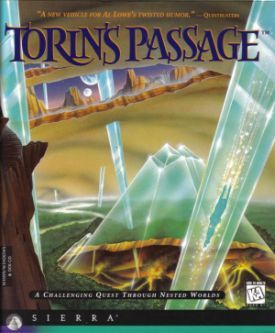 Torin's Passage is a somewhat obscure Adventure Game released by Sierra in 1995 and created by Al Lowe, who is best known as the creator of the Leisure Suit Larry series of adult games.
Advertisement:

While watching Mrs. Doubtfire in the theater with his daughter, Al noticed that the laughter coming from the audience came in two pitches, the children laughing at the slapstick, and the parents laughing at the more adult-oriented jokes kids wouldn't get. This gave him the idea to create a more family-friendly game with humor suitable for both younger and older players, and thus Torin's Passage was born.

The plot centers around Torin, the son of farmers living on the planet of Strata, which is comprised of different nested worlds, each one inside the other. Torin lives on the surface of Strata, but when his parents are kidnapped by the sorceress Lycentia, Torin must journey to the "Lands Below" in order to rescue them.

Torin's quest takes him deeper and deeper into Strata, through a series of bizarre worlds, until he uncovers the truth about his family and about his story.