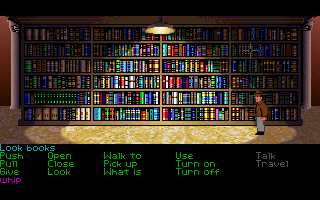 There's one tiny area labeled "book" instead of "books" in this screen. Good luck finding it.
"I mean, there's a reason the expression 'needle in a haystack' is used for a hopeless task no one in their right minds would undertake unless they had hours to while away in mindless drudgery. An excellent adventure game has no haystacks. A good adventure game probably gives you a magnet. A bad one makes you look at straw for seven hours. This game is nothing but haystacks, and sometimes the needles are made of straw."
— Wields-Rulebook-Heavily

on Limbo of the Lost
Advertisement:

A Pixel Hunt is an annoyingly common Fake Difficulty of graphical Adventure Games, where a hotspot or object that the player has to click on is only a few pixels in size, and hidden in the scenery. Since many such games do not tell you what is under the mouse cursor until and unless you actually click on it, this can make for frustratingly lengthy searches, or Guide Dang It! moments if the player never realizes there was an object to begin with, and thus can't solve the next puzzle.

Or let's talk about computer adventures; they often display information failure. "Oh, to get through the Gate of Thanatos, you need a hatpin to pick the lock. You can find the hatpin on the floor of the Library. It's about three pixels by two pixels, and you can see it, if your vision is good, between the twelfth and thirteenth floorboards, about three inches from the top of the screen. What, you missed it?"
Advertisement:
Yeah, I missed it. In an adventure, it shouldn't be ridiculously difficult to find what you need, nor should victory be impossible just because you made a wrong decision three hours and thirty-eight decision points ago. Nor should the solutions to puzzles be arbitrary or absurd.

The equivalent in Interactive Fiction (text adventure) games is You Can't Get Ye Flask. The opposite is Notice This. A contributing factor behind Empty Room Psych. See also Needle in a Stack of Needles.