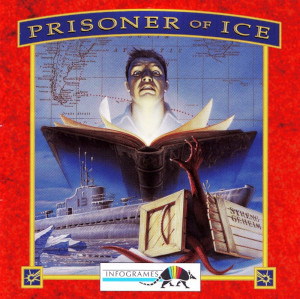 Prisoner Of Ice is a 1995 Infogrames adventure horror game set in the same universe as their 1993 release Shadow of the Comet. The game was released for PC and Macintosh in 1995, and exclusively in Japan, for the Sega Saturn and Playstation in 1997.

27 years have passed since journalist John Parker visited the village of Illsmouth and foiled the plot of the sorcerer Narachamus and his cult to bring the Great Old Ones to Earth, saving all of humanity in the process. It is now 1937, the world stands on the brink of a second world war, and in the Antarctic, a young U.S intelligence officer named Lt. Ryan has been assigned to the British submarine Victoria for a secret assignment. The submarine has just picked up a Norwegian prisoner who has fled a secret German base, alongside two mysterious cargo crates...

Prisoner Of Ice contains examples of: