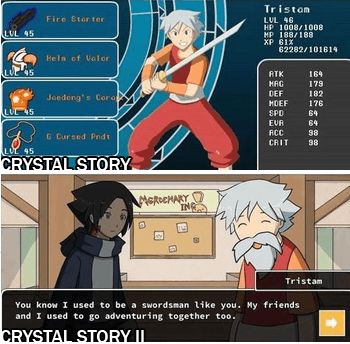 ...And then he took an arrow in the knee.
Advertisement:

Sometimes in a video game sequel, you meet the Player Character of a previous game in the series. This can range from said character's appearance just being a fun Continuity Nod to them having some level of story importance. In cases of the latter, this can sometimes lead to branches being cut off should the previous game have had Character Customization, any player influence on the plot, and/or Multiple Endings.

For players that have played said previous installment and thus would probably like seeing their personal character represented, some games may use an Old Save Bonus or otherwise give the ability to input the needed information in order to avert the aforementioned "cutting branches" problem. It goes without saying that the latter option will inevitably end up Interface Spoiler spoiling the reveal of seeing your old character alive and well, though.

Supertrope of Rogue Protagonist, where the previous player character is now a major villain, in which case it can also lead to Dueling Player Characters. Compare Legacy Boss Battle. See also Continuity Nod and Player Data Sharing (when another player's player character cameos).